You are using an outdated browser. Please upgrade your browser to improve your experience.
by Dom Esposito
August 2, 2012
In a recent tweet, Gameloft released the first screenshot for their upcoming iOS game. There’s currently no word on what the game is called, but the screenshot suggests that some great looking gameplay is on the horizon. The upcoming release is the developer’s first game powered by Unreal technology.

Our first Unreal game is coming! Guess the storyline with this hint: glft.co/T5az0n & vote to unlock a new one: glft.co/T5aoSF

I highly suggest clicking the link above and voting on Gameloft releasing the trailer. If the first screenshot they’re showing us is someone with a sword standing over a bloody corpse, I can’t wait to see the rest of the game. I really hope this game is a first person-style game with skeletons, swords, and gore. Hopefully we’ll see a trailer soon. What the hell is Gameloft up to? What do you think the storyline of this game will be? Source: Gameloft 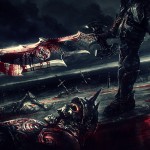 Get A First Glance At Gameloft’s Upcoming iOS Game

Get A First Glance At Gameloft’s Upcoming iOS Game
Nothing found :(
Try something else