You are using an outdated browser. Please upgrade your browser to improve your experience.
by Bryan M. Wolfe
August 24, 2012
As Apple waits for a jury to decide whether Samsung infringed on their patents and copyrights, another legal issue between the two companies might have just begun. Recently, Samsung opened a new store in Sydney, Australia, that just happens to look like one of Apple’s own, according to The Sydney Morning News. Located just one block from Apple’s Sydney store, the new “Samsung Experience Store” features a store layout, promotional material, and even employee uniforms that look very similar to what you'd find in an Apple retail store. Whether this is stealing remains to be seen. According to Samsung Australia’s Vice President of Telecommunications Tyler McGee:

Well, if you look at our layout this is the layout that we use around the world and it's about basically giving the consumers the opportunity to interact, learn and play with our devices.

While imitation is said to be the sincerest form of flattery, we don’t think Apple will be amused by Samsung’s latest move. After all, the central question to soon be decided in a California courtroom is whether Samsung copied the iPhone and iPad when they introduced similar devices. Samsung's latest move seems to be further confirmation that they just can't help themselves and love copying all things Apple. Take a look: We're thinking that Conan O'Brien will have a field day with this one too. Does this look like copying to you? Source: The Sydney Morning News 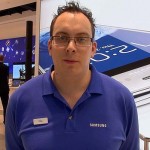 Samsung, Just Call Yourself Apple And Be Done With It

Samsung, Just Call Yourself Apple And Be Done With It
Nothing found :(
Try something else