You are using an outdated browser. Please upgrade your browser to improve your experience.
by Bryan M. Wolfe
August 14, 2012
Throughout much of last year, AppAdvice, like most Apple news and review sites, referred to the company’s fifth generation handset as the “iPhone 5.” Of course, when Cupertino unveiled the iPhone 4S in October, that moniker was proven incorrect. When many sites shifted gears and began referring to Apple’s 2012 handset as the “iPhone 5,” we took a different path. We’ve referred to the handset likely to be unveiled next month as “the new iPhone.” We did this for three reasons. For one, Apple retired the numbering system when they unveiled “the new iPad” last spring. For another, we weren’t sure Apple would call the sixth generation handset, the iPhone 5. Finally, our editors want it this way! Now, however, iDownloadBlog has made a strong case on why the next iPhone could, in fact, be called the iPhone 5 after all. To make their case, the site referenced a MacRumors thread where forum member Millionaire2K laid out the obvious: In other words, even though the next generation iPhone won’t be Apple’s fifth handset, call it the “iPhone 6" “would lead to all kinds of confusion in the future.” It would also be confusing if Apple were to call the next handset “the new iPhone.” After all, once Apple releases their next handset, they will almost certainly keep selling the iPhone 4S, and perhaps the iPhone 4 too. Their conclusion, which sounds about right, is:

So with the iPhone 6 option out, that really only leaves the two aforementioned choices: the “iPhone 5″ and “the new iPhone.” The latter still sounds weird to me because Apple will likely have 4 different iPhone models on the market this fall — the iPhone 3GS, the iPhone 4, the iPhone 4S, and this year’s model. How does the average consumer determine that “the new iPhone” is above the 4S? This is where the 5 makes more sense.

Personally, I wasn’t too crazy with “the new iPad” name, for one obvious reason. When Apple releases their fourth-generation tablet in 2013, calling it the “new new iPad” would make absolutely no sense. Therefore, I expect to see the “iPad 4” debut next year, as Apple once again uses a numbering system to name their iOS devices. Beforehand, however, I fully expect to see Apple christen the “iPhone 5” next month. For my editors, however, I'll still call it "the new iPhone," until Apple tells me otherwise. Regardless of what Apple calls the sixth-generation iPhone, it could arrive as soon as Sept. 12. Stay tuned. 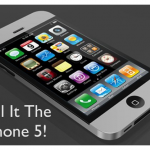 The Hell With It, Call It The iPhone 5

The Hell With It, Call It The iPhone 5
Nothing found :(
Try something else