You are using an outdated browser. Please upgrade your browser to improve your experience.
by Bryan M. Wolfe
August 30, 2012
One of the big unknowns about the next iPhone remains the type of chip it will contain. Now, Sonny Dickson has posted a photo that he claims shows an A6 processor. The photo, which looks fuzzy at best, appears to show the logic board of the next iPhone with a processor named A6. If this photo is real, and we cannot confirm that it is, it would mean that Apple has decided to forgo the A5X chip base that resides on the new iPad. The iPhone 4S includes an A5 processor. Earlier this year, we reported that Apple was working on an A6 processor that would feature a quad-core ARM processor based on Samsung’s Exynox 4 architecture. However, we had yet to see an A6 in the wild. Hopefully, we will know very soon what new hardware features will be included on the sixth-generation iPhone. Rumors suggest Apple will make the iPhone announcement on Sept. 12. Source: Sonny Dickson Via: AppleInsider 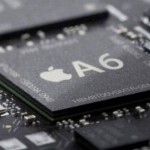 The Next iPhone: It Isn't Bigfoot, But It Could Be The A6 Processor
Nothing found :(
Try something else