You are using an outdated browser. Please upgrade your browser to improve your experience.
by Bryan M. Wolfe
August 22, 2012
After countless rumors, Apple’s next iPhone is expected to be unveiled on Wednesday, Sept. 12. Just nine days later, the sixth generation handset should be going on sale in the United States. When should other countries expect to see the iPhone? Here is a tentative calendar, which is based on Apple's past practices.

Although Apple has yet to officially announce Sept. 12 as the day the iPhone makes its debut, this is the date we’ve been hearing for weeks. During this event, which should be held in San Francisco, Apple will almost certainly announce their next handset, the “iPad mini,” and, of course, the launch of iOS 6. This is also the day preorders for the iPhone could begin, at least in the United States.

Past practice suggests that the new iPhone will go on sale on this day in the U.S., and in six additional countries. This includes Australia, Canada, France, Germany, Japan, and the United Kingdom.

The big unknown is when the new iPhone will arrive in China. The last time around, Apple took three months to begin offering the iPhone 4S in the world’s most populous nation. However, we don’t expect that type of delay this time around. Instead, we expect to see the iPhone’s arrival in China approximately one month after it first hits the United States. Keep in mind that Apple has not confirmed these dates. Rather, they are only based on Cupertino’s past practices. Once we have an official list, we will certainly let you know. 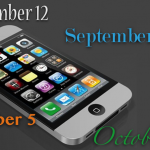 When You Should Expect The Next iPhone In Your Country

When You Should Expect The Next iPhone In Your Country
Nothing found :(
Try something else