You are using an outdated browser. Please upgrade your browser to improve your experience.
by Dom Esposito
September 17, 2012
The sixth generation iPod nano was announced on Sept. 1 2010. It was completely redesigned and took on a much smaller form factor. Because of its compact size, the iPod nano quickly became a popular wrist accessory as people began wearing it as a watch. Various companies, including one called iWatchz, began manufacturing these popular watch straps. We often hoped that Apple would continue this trend and update the iPod nano to perform more smartphone-like tasks. Features such as Bluetooth, iPhone notifications, and a FaceTime camera were desired by like-minded consumers. Implementing these features in an iPod nano would take its reincarnation as a watch to another level. Unfortunately, Apple had other plans. Last week, Apple announced the seventh generation iPod nano. While the redesign didn’t come as a surprise to me, it automatically shredded the future of any watch accessories. While the sixth generation iPod nano will still be available from retailers until the stock fades away, these companies can no longer put their efforts and faith into a product that is not being manufactured by Apple anymore. That would be the equivalent of a modern day company manufacturing custom Sega Genesis controllers. Companies such as iWatchz have expressed their somber emotions towards Apple’s decision to move in a different direction. As iWatchz notes:

The release of the freshly re-designed 7th generation iPod nano confirmed the end of wearing your iPod nano as a watch and ultimately the end of iWatchz.

This may be the end of an era, but iWatchz isn’t taking it personally. They have now rebranded and changed their name to kubxlab. The company will continue selling their iPod nano watch straps, but has also expanded to a new market with future offerings of other products and accessories focused around Apple devices. I knew that eventually Apple would take the iPod nano in a different direction, but I only hoped that the changes would be to improve on what it lacked as a smart watch. Will Apple ever create such a device? In my opinion, I wouldn’t count on it anytime soon. I’d like to say a final farewell to the iPod nano watch. I’ve enjoyed so many great times with my sixth generation iPod nano, and I fully intend on wearing it as a watch for as long as it shall operate. R.I.P. iPod nano watch: 2010 – 2012 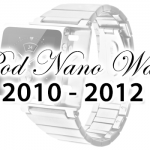 The End Of An Era: iPod nano Watch, We Bid You Farewell
Nothing found :(
Try something else