You are using an outdated browser. Please upgrade your browser to improve your experience.
by Bryan M. Wolfe
September 4, 2012
Over 1 million unique identifiers have been released to the public by a hacker group that stole an FBI-owned laptop in March. Antisec has announced that they have dumped the UDIDs from Apple iOS devices over the Labor Day weekend, according to MacRumors. In total, the stolen laptop contained 12 million identifiers, which can be used to obtain usernames, push notification tokens, “and in some instances, names, cell phone numbers, addresses, and zip codes." Luckily, Antisec is said to have stripped “most personal information” from these records. What this leak means to users, however, remains unclear. On the positive side, “UDIDs themselves are rather harmless in isolation.” However, in terms of privacy, this could be a concern. UDIDs, by their very nature, can help law enforcment collect “activity and interests” of the users. Since the list was in the possession of the FBI, one could assume that the government may have been using this information for this purpose.

The only way to tell if your UDID was included on the list, is to download the file yourself from Pastebin. To find your UDID, make sure your iOS device is attached to your PC or Mac. From there, go into iTunes and click on your device's icon. You will find your UDID on the Summary page near the top of the screen right after your device's serial number is listed. If you don't see the UDID, click below it, and it should appear. Regrettably, this list only contains the 1 million UDIDs leaked; the other 11 million have yet to be publicized. When we hear more about this security breach, we'll let you know. Source: MacRumors Photo: Macsorro 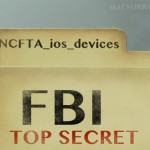 Why Did The FBI Have 12 Million Apple UDIDs On One Laptop?

Why Did The FBI Have 12 Million Apple UDIDs On One Laptop?
Nothing found :(
Try something else