You are using an outdated browser. Please upgrade your browser to improve your experience.
by Bryan M. Wolfe
September 21, 2012
When Apple began iPhone 5 preorders, I figured it would be okay to wait a few hours to place my order and still receive it on launch day. Yeah, that plan didn’t work out quite so well. When I finally got around to preordering, I was informed that my order would take 2-3 weeks to arrive. At the time, I was fine with this. However, as launch day got closer, I decided to join the crowds and stand in line. My hope was to get my iPhone today and then cancel my original order. Unfortunately, AT&T and Apple had other plans. Because my order, which I placed at ATT.com, was “in process,” there was nothing my local AT&T retail store could do to cancel it. And since I didn’t have another qualifying line to upgrade, I was told that I’d have to pay full retail to get my phone today. To do this, I would have had to part with $800 on top of the $300 I had already spent for the 32GB iPhone 5. Once I returned the second (or rather, the original) iPhone, I would have been credited the $800. Strangely, AppAdvice's Karen Freeman, who had a similar experience was told that she wouldn't have been credited $800. Instead, she would have only received the unsubsidized price, $300. In the end, I decided to walk away from the AT&T store empty-handed. Sure I want my iPhone 5, but I wasn’t willing to spend more money (even temporarily) to get a phone now instead of sometime in the next week or two. While it would be easy to blame AT&T for my woes, this was my fault. I made the decision to shop directly at AT&T, which must pay Apple the unsubsidized price for each iPhone they sell. Since the order was “in process” (in other words, Apple had probably already received “my money,”) I was essentially asking AT&T to float me another $800 until the original order was received and then returned. Hey, at least I got some free coffee and donuts from the very receptive AT&T representatives. Photo: Susan Megrund (who did get her iPhone 5) 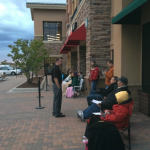 Why I Didn’t Get My iPhone 5

Why I Didn’t Get My iPhone 5
Nothing found :(
Try something else