You are using an outdated browser. Please upgrade your browser to improve your experience.
by Bryan M. Wolfe
October 30, 2012
Google has announced that there are now 700,000 apps available for Android. This means that for the first time, the number of apps available for Android customers matches those for iOS, according to Bloomberg. There are two general ways of looking at this news. For one, Apple can no longer sell to developers the notion that iOS is the largest mobile platform in the world. However, I don’t think that it took Android crossing an important threshold for most developers to already know this. In fact, I’m pretty sure developers (and customers, for that matter) have known for sometime that Android and iOS are more-or-less the only game in town on the mobile front. No offense, Microsoft. This doesn’t mean, however, that Android is now somehow better than iOS. Most likely, most of those 700,000 apps were already available through the App Store. In other words, developers have finally found the time to move some of their most popular iOS apps to Android. Going forward, I expect the number of apps on both platforms to continue to grow, perhaps in unison. And that's good for Android and iOS customers. 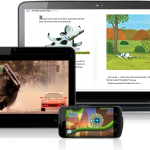 Android Now Matches iOS In Number Of Apps Available
Nothing found :(
Try something else