You are using an outdated browser. Please upgrade your browser to improve your experience.
by Bryan M. Wolfe
October 12, 2012
Apple has long been known for their brilliant product design and attention to detail. In the case of the new clock interface in iOS 6, however, Cupertino let someone else do the designing -- 68 years ago. Swiss Federal Railways (SBB) and Apple have reached an agreement on the use of SBB’s station clock on certain devices such as iPads and iPhones. The licensing agreement means that Apple can use a design that was first introduced in 1944 by the engineer and designer Hans Hilfiker. Here is the full text of SBB’s announcement, as translated to English:

Swiss Federal Railways (SBB) and Apple have reached an agreement on the use of SBB's station clock on certain devices such as iPads and iPhones. This arrangement has been mutually agreed by both parties in a licence agreement.

The SBB station clock was designed for the company in 1944 by the engineer and designer Hans Hilfiker . It is a design icon that has obviously lost none of its appeal in the digital age. A special feature of the clockface is its striking red second hand in the shape of a railway guard's signalling disc. Even now it symbolises the innovation and reliability that are key qualities attributed to both SBB and Switzerland as a whole.

Details of the licensing agreement between SBB and Apple will remain confidential. To see Hilfiker’s design, go into the Clock app on an iOS 6 iPad. From there, tap on “World Clock.” It is always nice to see Apple come up with new designs. In this case, however, using a symbol that has been around for 68 years seems like a good move. Photo: SBB 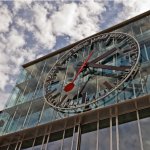 Apple Avoids ‘Clockgate’ As They Sign Licensing Agreement Over iOS 6 Design
Nothing found :(
Try something else