You are using an outdated browser. Please upgrade your browser to improve your experience.
by Bryan M. Wolfe
October 17, 2012

Of all the companies that should have offered Passbook support for their apps by now, Klout is certainly not one of them. But they did. Yippy.

At the risk of sending my Klout score down, let me be frank. Why in the world would anyone but a narcissist would want to have a Klout card in their iPhone Passbook? I mean, seriously?

First launched in 2009, Klout uses some sort of secret formula to determine just how much a person “influences the world.” The result is a Klout score ranging from one to 100. In this case, however, the world Klout is speaking of requires a Web connection.

A Klout score is based on your most “influential moments” on social networks including Twitter, Facebook, and Google+, among others. As such, the score goes up and down depending on that influence. In other words, Klout isn’t much interested in how influential someone is to real-life friends and in their neighborhood. But wow – they know how important you are on Twitter or Facebook!

If you haven’t tried Klout, that doesn’t mean you don’t have a Klout score. Oh, au contraire. Simply go to Klout.com and sign up and watch your Klout score magically appear.

If you’ve detected some sarcasm here, then you definitely deserve a “Give +K.” It is not so much that I dislike Klout. Rather, its true purpose has eluded me. And the introduction of a Klout card has only added to my confusion.

Klout Perks is a program that offers “exclusive products or experiences that you earn based on your influence.” Past perks have included three days with a Chevy Volt, rewards from GILT, and – don’t laugh – Windows Phones. To convince more folks to signup for Klout Perks, the company is offering a Klout card as a bonus. That’s right – a pretty vanity card for your virtual wallet.

How’s that for being influential? To get your own card that says you are cool, download the free Klout app in the App Store. 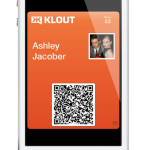 As You Can See By My Passbook, I Am So Damn Popular

As You Can See By My Passbook, I Am So Damn Popular
Nothing found :(
Try something else