You are using an outdated browser. Please upgrade your browser to improve your experience.
by Bryan M. Wolfe
October 3, 2012
Apple is asking select retail stores to dedicate 40 hours of staff time per week, distributed among a number of employees, for crowdsourcing purposes. The purpose is to make the heavily panned Maps app in iOS 6 better, according to MacRumors. As part of a pilot program, Apple retail store employees will be asked to “manually examine Apple's mapping data in their areas and submit corrections and improvements.” Changes to maps will then be submitted through a “dedicated internal portal on Apple’s system.” One source has indicated that a team of ten employees would be participating in the program at one store, with one of those employees being designated a "subject matter expert" to oversee the team and receiving training on how the team will operate. While it is nice that Apple is doing something about improving iOS 6 Maps, I would hope that this is just the first of many steps. In particular, employee crowdsourcing is fine, but getting customers also involved is essential. As I recently discussed, Apple must also implement a tool similar to Google’s Map Maker, which would allow users to edit map features. Nonetheless, this news is definitely a step in the right direction. Late last month, Apple CEO Tim Cook publicly apologized for the current state of iOS 6 Maps. In doing so, he promised to improve Maps and make it part of the “best experience possible to our customers.” Source: MacRumors 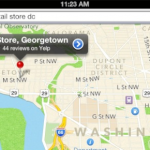 Get Ready To Say Hello To Map Geniuses At An Apple Retail Store Near You
Nothing found :(
Try something else