You are using an outdated browser. Please upgrade your browser to improve your experience.
by Lory Gil
October 1, 2012
Welcome back to the Musician’s Corner, where we highlight apps and accessories for musicians and serious fans of music. Last week, we focused on music teachers by introducing you to the Circle of Fun, an app that visually teaches music theory. This week, we’re going hands-on with an itty-bitty mobile speaker for listening to music on the move. Logitech|UE is the new music-based offshoot of the tech accessory company Logitech. They recently launched a line of music products that focus on high quality, convenience, and mobility. Since the Musician’s Corner is a column that focuses on music, we thought this would be a perfect place to review some of their new stuff. 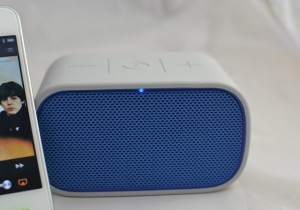 I may not be an audiophile, but I know how to properly listen to music. I rarely listen to music on my iPhone unless I’m sending the data to a better set of speakers through Bluetooth or AirPlay. It is practically offensive to listen to Tom Waits through those pathetic ear buds that come with Apple devices. Most days, I’d tell you to collect LPs and get a good turntable before I would recommend digital music. I didn’t have high hopes for the Mobile Boombox by Logitech UE. I’ll probably still tell you to invest in a record player, but at least I now know that digital music can actually sound good. 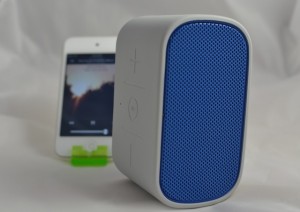 The tiny speaker looks like it would blast little more than high-pitched, tinny distortion. The depth and power that pushes out of that speaker grate is both surprising and refreshing. The 4.4 x 2.4 x 2.6-inch compact gadget offers mobility and quality like not other speaker of its size that I’ve ever used. Pairing your device with the speaker is as simple as can be. You can add up to eight different Bluetooth-enable devices, too. I am always sharing music with my friends at get-togethers. “Have you heard the new Leonard Cohen album? Here, let me play it for you from my iPhone.” With these speakers, you can switch from one device to another just by pausing the song. If your friend wants to share a song that sounds similar, he can hit the play button on his device once you’ve stopped your song and it will play right away. You can play Round Robin with your music. 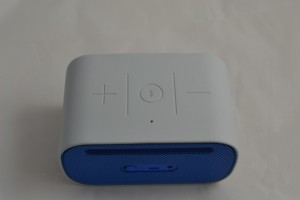 The speaker is powered with a rechargeable battery. The battery life is supposed to last for up to 10 hours, depending on what you use it for. I played music non-stop for at least eight hours (probably more) before the device finally ran out of power. To recharge it, just plug it into either your computer using the included USB cable, or a wall plug using the included wall adaptor. When you plug it in, the battery light will slowly blink. I don’t know whether you will know when the speaker is fully charged because I unplugged it only 15 minutes after I started recharging it so I could play with it some more. I often record my band’s practice with my iPhone, especially if we are working on a new song. The practice space doesn’t have anything I can connect my device too, so I usually hold the phone up to my microphone so that the rest of the band can hear the music. The Mobile Boombox is small enough to fit in my gig bag, along with my cords, tuners, pedals, and stuff, without adding any significant bulk or weight. When I playback songs we’ve just recorded, we can get a better idea of how it sounds, instead of trying to distinguish the guitar and bass through the iPhone’s speaker. 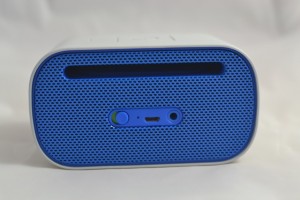 While this high-quality device offers thick and deep resonance, it is still a tiny speaker. I played a record on my turntable and the digital version of the same album through the Mobile Boombox and the difference was noticeable. In defense of the Logitech UE speaker, I was comparing it to Bose stereo speakers. It is like comparing a Gibson SG to a Daisy Rock Guitar. They don’t compete on the same playing field. Anyway, the Mobile Boombox performed excellently. The main difference between the sound coming from the diminutive speaker and my full-sized Bose was that the former sounded slightly muffled. You also can’t “turn it up to 11” without suffering audio quality. I played Slayer at the highest volume possible and there was a slight bit of distortion in the speakers. Just to be sure that the problem wasn’t related to the thrash metal drum beats of Slayer, I also played The Beatles at full volume and heard the same distortion. The Mobile Boombox works perfectly as a speakerphone for sending and receiving phone calls. The voice clarity is even better that holding your ear to your iPhone and you don’t have to be directly in front of the speaker if you want to talk. It picks up sound from a decent distance. 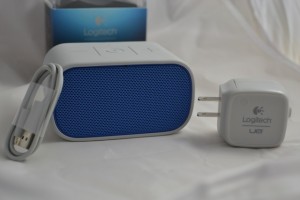 If you are like me, you’ve probably already spent hundreds of dollars on various mobile external speakers for your iPhone and ended up slightly disappointed with the sound quality. Although this tiny speaker doesn’t compare to a good old-fashioned record player with a nice home sound system, it holds its own against the big dogs. The Mobile Boombox is top in its class, but the price doesn’t speak to that. The compact speaker only costs $99 with free shipping. You can choose from five different colors to fit your personality. Purchase the tiny, but powerful, speaker directly from the company’s website. Well, that’s it for another installment of Musician’s Corner. If you need a tiny portable speaker but don’t want to compromise convenience for quality, the Logitech UE Mobile Boombox is an excellent choice. Do you have any suggestions for portable speakers that you think might perform better than the Mobile Boombox? Send me an email at [email protected] and I’ll look into getting a review unit for comparison.