You are using an outdated browser. Please upgrade your browser to improve your experience.
by Bryan M. Wolfe
October 18, 2012
Each week, I must look at hundreds of apps. However, it isn’t often that I am asked to comment on an app that has absolutely no chance of making it to the App Store. Steve Jobs Timeline is one of those apps. Created by Nuskha Labs, the iPad app is nothing less than a heartfelt dedication to the late Apple co-founder through the use of images and quotes. The app’s main feature is a retelling of Jobs’ life through the use of what looks like a sun setting over the horizon. Here, 23 rays of sunshine branch out, each representing a key moment in the life of Apple’s former CEO. Clicking on each offers a look at the event through the use of  simple, yet concise, words against the backdrop of haunting music that I am still trying to get out of my head. It is all here. From Jobs’ founding of Apple and his untimely exit, to the “Toy Story” and Pixar years. From his return to Apple that saw the launch of the iPhone and iPad, to his medical leaves and untimely death. And, as if to recognize a life ended too soon, this sun -- this half circle -- can be turned in either direction with a movement of a finger. Steve Jobs Timeline, not surprisingly, will never come to the App Store. The app was rejected by Apple, as this brief, yet strangely appreciative, message to Nuskha confirmed:

Thank you for submitting your app commemorating Steve Jobs. We appreciate your efforts honoring Steve. However, we've decided to honor his life in other ways and we are no longer accepting Steve Jobs apps. You can use the Ad Hoc distribution method to share your app with your friends and family. You can find more information in the iOS Developer Program guide.

The folks at Nuskha never expected Steve Jobs Timeline to get the green light. Nevertheless, they created it anyway as their way of offering a tribute to a man that obviously affected them in many ways. As they state on their website:

Steve Jobs has been a long time inspiration to us. We started thinking how best we can give tribute to Steve's life and work. We set out to create an iPad App (Steve Jobs Timeline ) which captures most important events of Steve's life, work and entrepreneur journey. We challenged our limits and created something very unique and amazing. Hope you would love the application as much we love.

Naturally, this begs an important question. Should apps like this be rejected simply because they are about the late co-founder? On this, I very much go both ways. Since his death at aged 56 last year, Jobs has grown into someone more than that eccentric, yet brilliant, innovator that saved his company from a likely death. Instead, he now represents what happens when hard work, dedication, and a little luck, perfectly align. And in doing so, makes the world a better place. Because of this, I strongly feel there should be a place for apps such as Steve Jobs Timeline. And logically, that place should be the App Store. However, I also understand Apple’s desire to keep hold of Jobs’ image and make sure that it isn’t altered in any way. In doing so, while I appreciate what the fine folks at Nuskha have done, I also respect Apple’s decision to reject all Steve Jobs dedication apps. Still, perhaps there could be a happy medium. While I would never support censorship, approving some Jobs apps wouldn’t be asking too much, especially if the app in question would offer an honest look at the Apple legend. Hopefully, as we move further away from Jobs’ death, Apple will rethink their policy. In doing so, others like Nuskha could not only retrace Jobs’ life, but also show just how important he was in shaping theirs. Important note: If you are interested in receiving Steve Jobs Timeline, Nuskha has a limited number of copies available. These will be accessible using an ad-hoc solution. For more information, visit the Nuskha website. What is your opinion? Do you feel that Apple owns Steve Jobs' image? 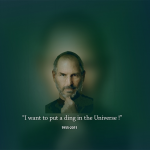 Rejection Of App Begs The Question, Should Apple Own Steve Jobs' Life Story?

Rejection Of App Begs The Question, Should Apple Own Steve Jobs' Life Story?
Nothing found :(
Try something else