You are using an outdated browser. Please upgrade your browser to improve your experience.
by Bryan M. Wolfe
October 10, 2012
Finding an iPhone 5 to purchase just got more difficult. Supply shortages that are typical immediately following an iPhone launch are being constrained further by new quality-control measures that Apple has implemented to get past “scuffgate,” according to Bloomberg. Many consumers have complained that the iPhone 5’s anodized aluminum housing has led to scrapes and nicks, especially on the black model. Now it appears that Apple is doing something about this. According to the report, Apple managers told executives at Foxconn near the end of September to “tighten production standards.” This, in turn, has led to a slowdown in iPhone 5 production. As such:

The slowdown is heightening supply concerns that have cost Apple about $60 billion in market value since the iPhone debut -- a shortcoming of the drive to imbue products with qualities that make them alluring yet more difficult to manufacture.

Our own Dom Esposito offered his assessment on scuffgate soon after he received his black iPhone 5, stating:

I was confused as to how my new iPhone 5 already had been scratched, especially right out of the box. This definitely wasn’t Apple’s style, and surely it was just a fluke. After some light research on the Web, I found that several others had experienced the same problem.

Improving future iPhones, of course, won’t do much for those already with a scratched handset. The situation becomes even more challenging when iPhone 5 supplies are so small. There is nothing more frustrating, for example, than opening the box of your new iPhone and seeing that the handset is already scratched. And then attempt to return it only to find there is no replacement available. Luckily, scuffgate doesn’t seem to affect white iPhones, although that is small comfort to those that went with the black model. Do I smell a class action lawsuit coming, or perhaps an Apple rebate? Source: Bloomberg Photo: Justin Sullivan/Getty Images 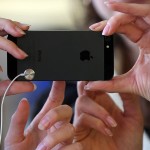 Scuff This: Apple Slows Down iPhone 5 Production
Nothing found :(
Try something else