You are using an outdated browser. Please upgrade your browser to improve your experience.
by Bryan M. Wolfe
October 12, 2012
Three weeks ago, consumers were only just getting their hands on the iPhone 5. Now, Apple's phone is generating more Web traffic than Samsung’s Galaxy S III, which first went on sale in July. According to a new Chitika survey, between the two devices 56 percent of Web traffic is being generated by the iPhone 5. This compares to 44 percent for Samsung’s top selling phone. According to the report:

Only 18 days since the public release of the iPhone 5, the newest Apple device has overtaken the Galaxy S III in terms of Web traffic volume. Record-breaking sales numbers, along with new 4G browsing speeds which encourage data usage, are the most likely explanation for this tremendous growth. This latest shift in the mobile ecosystem is not welcome news for Samsung, which has positioned its device as a direct competitor to the iPhone 5.

While Web usage alone doesn’t necessarily translate into actual sales results, I think it’s safe to say that the Galaxy III’s tenure as the top selling smartphone is coming to an end. In August, Samsung’s phone overtook the iPhone 4S for the very first time. Prior to that, Apple’s fifth-generation iPhone was the top selling smartphone in the United States since its introduction in October 2011. Apple is expected to announce the company's fourth quarter results on Thursday, Oct. 25, 2 p.m. PDT. These numbers will include iPhone sales through the end of September. For Chitika's study, they conducted a user agent analysis on millions of mobile ad impressions, spanning a 7-day time frame from Oct. 3-9.  They looked solely at impressions coming from the iPhone 5 and Galaxy S III. 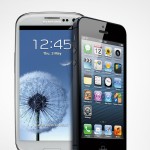 New Survey Suggests The iPhone 5 Is Besting The Galaxy S III
Nothing found :(
Try something else