You are using an outdated browser. Please upgrade your browser to improve your experience.
by Bryan M. Wolfe
November 26, 2012
At one of the most popular malls in the U.S., Apple bested Microsoft on Black Friday in terms of foot traffic and sales per hour. In fact, at Minneapolis’ Mall of America, Apple saw traffic increase 31 percent year over year, according to AppleInsider. In an annual survey of Black Friday trends, Gene Munster and his team at Piper Jaffray observed shopping experiences at one of the largest malls in the world. They found that Apple sold nearly five times as many items as Microsoft on a per hour basis. The also sold more iPads versus the new Surface tablet. In total, Apple saw overall sales average 17.4 items per hour, compared to 3.5 items at Microsoft. In terms of tablets, Apple sold an average of 11 iPads per hour. Surprisingly, Microsoft didn't sell a single Surface tablet during the time Munster was making observations. In fact, all but two of the purchases from the Microsoft store were games for its Xbox game console. Naturally, these observations may in no way relate to Black Friday sales overall. If they do translate worldwide, however, they suggest Apple had a very good sales day, while Microsoft did not. Apple and Microsoft retail stores are located on the same level and across from each other at the Mall of America. Source: AppleInsider 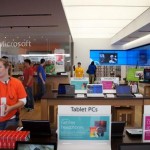