You are using an outdated browser. Please upgrade your browser to improve your experience.
by Bryan M. Wolfe
November 15, 2012
For those hoping to get their hands on one of Apple’s new iMacs in time for the holidays, we have some potentially bad news for you. According to French language blog MacBidouille, Apple will be unable to fulfill orders for the next generation desktop Mac before the end of the year. Unveiled at last month’s iPad mini event, the new iMac is 5mm thin, which is 80 percent smaller than the previous generation. Unfortunately, Apple appears to be having production issues to get that thinness just right. As a result, both the 21.5-inch and 27-inch iMac might not be arriving in stores until January, at the earliest. Originally, Apple announced November and December launches, respectively. Keep in mind that Apple has yet to confirm this news. On the company's website, both models are still listed with their original “coming soon” dates. However, preorders have not yet started. As per usual, we’ll keep you updated. Source: MacBidouille Via: AppleInsider 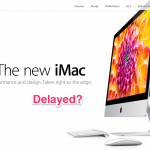 There May Not Be A New iMac Under The Christmas Tree After All
Nothing found :(
Try something else