You are using an outdated browser. Please upgrade your browser to improve your experience.
by Bryan M. Wolfe
December 28, 2012
You have to love Michael Bloomberg, the mayor of New York City who begins his final year in office next week. After past rants on fatty foods, sugary drinks, and the like, the billionaire has come out against iDevices, according to The New York Times. Bloomberg, who was first elected in 2001, believes that one of the reasons crime has jumped in his city during the last year is due to the rise in stolen iPhones and iPads. In a radio interview, the mayor claimed that Apple products appeared to be the preference of many thieves. As such, thefts of competing devices, such as the Samsung Galaxy, were not included in his count. Although this year’s crime statistics were not yet made available, the mayor’s office did release the following information: Through Monday, Dec. 24, New York has recorded 108,432 major crimes for the year, up from 104,948 in 2011. Since January, major crimes in Gotham have risen by 3,484. The increase in Apple product thefts: 3,890. This is an increase of 3.3 percent. Major crimes cover a number of felonies, including murder, grand larceny, and robbery. As the mayor’s press secretary later said:

If you just took away the jump in Apple, we’d be down for the year.

According to the report, iPhones:

... have long proved irresistible to city thieves, particularly on the subway, where crime rates shot up in 2011 after police investigators discovered that robbers were targeting the expensive, high-tech gadgets. The Police Department has used dozens of decoy officers and unusual methods to try to stanch the thefts, which usually occurred as trains entered and left stations, allowing for a quick getaway.

I'm certainly not discounting Bloomberg's numbers. However, I do find it interesting that the mayor of one of the largest cities in the world is blaming the popularity of cellphones for rising crime numbers. Not mentioned by the mayor as possible explanations: weak employment numbers, the affect Hurricane Sandy has had on many New Yorkers, and maybe those unpopular 16 oz. soda cups. Perhaps Bloomberg should draw some inspiration from one of his past initiatives to help bring down crime in the new year.  Just as restaurant owners are required to post the calories of each item they sell, maybe Apple stores should be required to post how much jail time a criminal will receive for each iPhone stolen. 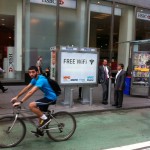 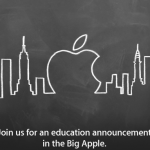 Apple To Make Education Announcement Next Thursday In New York
Nothing found :(
Try something else