You are using an outdated browser. Please upgrade your browser to improve your experience.
by Bryan M. Wolfe
January 15, 2013
A new survey from 451 Research’s ChangeWave service suggests that Apple and Samsung will continue to dominate the American smartphone market in 2013. The survey also had some good news for those hoping to see a larger iPhone later this year. The December survey of 4,061 primarily North American respondents concluded that among likely smartphone buyers in the next 90 days, 50 percent would be choosing an iPhone. A Samsung smartphone would be chosen by 21 percent of respondents. A survey taken just after the iPhone 5 debuted in September saw that 71 percent of respondents would choose an Apple smartphone, versus 13 percent for Samsung. Samsung’s 8-point gain is called “unprecedented,” while the company’s overall score of 21 percent is an all-time high in the North American smartphone market. 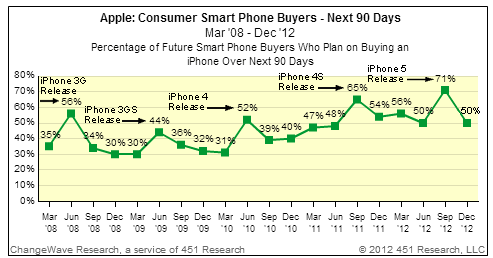 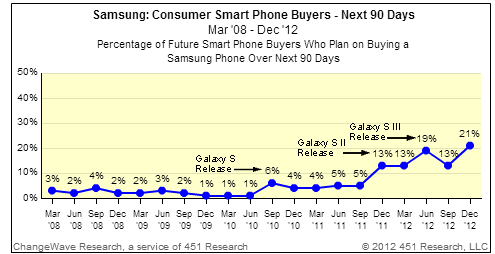 According to Paul Carton of 451 Research’s ChangeWave service:

Consumer buying intent for Samsung smart phones has been extraordinary to start the year. Considering the Galaxy S III has been out for several months we'd normally expect a slowdown by now – but it’s still red hot.”

Of those indicating that they will purchase a Samsung smartphone, 69 percent say that they will choose a Galaxy S III. By contrast, 23 percent will select a Galaxy Note II. In terms of satisfaction, Microsoft’s Windows Phone 8 operating system scored well. The survey shows that 53 percent of users are very satisfied with the operating system. This compares to 71 percent that say the same about Apple’s iOS, and 48 percent that had kind words for Google’s Android. 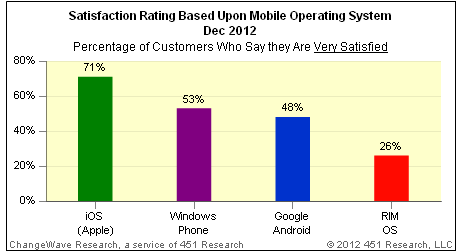 With this level of consumer interest, Apple is perfectly capable of producing a large-screen smart phone that’s virtually a tiny tablet – they could call it an 'iTab' – and have it on the shelves for the next Holiday season.