You are using an outdated browser. Please upgrade your browser to improve your experience.
by Bryan M. Wolfe
January 24, 2013
Lost during Apple’s earnings call yesterday was what what CEO Tim Cook had to say about iCloud and the service’s future. Just 15 months after it debuted, iCloud is now being used by 250 million users. This is an increase of 60 million users during the last quarter. As Gigaom first noted, this is 12 million more users than actually purchased an iPhone between October and December. As Cook explained, more than 2 billion iMessages, and 6 billion notifications are sent per day. Also to date, Game Center has more than 200 million users. Cook also said that “usage in maps is significantly higher than it was prior to iOS 6.” Apple said that in 2013, the company would be spending $10 billion in capital expenditures. As CFO Peter Oppenheimer explained, part of the spending would go toward “adding to our datacenter capabilities.” In other words, on iCloud. First released to the public in late 2011, iCloud includes a number of core services. These include email, Reminders, photo syncing, Documents in the Cloud, iTunes Match, and more. On Wednesday, Apple reported record revenue of $54.5 billion along with a net quarterly profit of $13.1 billion, or $13.81 per diluted share. Apple missed estimates on revenue numbers, but did beat profit estimates. During the all important holiday quarter, the company sold a record number of iPhones, at 47.8 million compared to 37 million last year. The company also sold 22.9 million iPads, compared to 15.4 million in the same quarter last year. 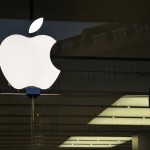 Apple’s Rocky Week Set To Begin As Uncertainty Takes Hold
Nothing found :(
Try something else