You are using an outdated browser. Please upgrade your browser to improve your experience.
by Bryan M. Wolfe
January 2, 2013
The New Year’s Day Do Not Disturb bug that has affected many iOS devices hasn’t gone away as we’ve entered the first workday of 2013. First noticed on Tuesday, Jan. 1, the Do Not Disturb feature on some iDevices hasn’t been shutting off automatically as expected. As a result, calls, messages, and notifications are being missed since the service refuses to take a rest. Until this issue is resolved, we suggest turning off the feature. To do so, go into the Settings app and set "Do Not Disturb" to the off position. Apple has yet to address this issue, besides releasing this ill-timed ad. When they do, we'll certainly let you know. UPDATE: For those still having the problem, Apple support says it will be fixed on January 7. For now you can manually turn the Do Not Disturb feature off when you don't need it, as we suggested above. 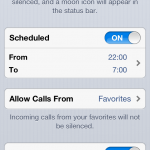 Apparently, iOS 6's Do Not Disturb Feature Has A New Year's Day Hangover
Nothing found :(
Try something else