You are using an outdated browser. Please upgrade your browser to improve your experience.
by Bryan M. Wolfe
January 21, 2013
Apple hasn’t officially made an appearance at Macworld since 2009. Steve Jobs and Steve Wozniak will still be there, or at least the actors who play them will be, according to Macworld. Ashton Kutcher and Josh Gad play Jobs and Wozniak in the upcoming movie, "jOBS." To promote the motion picture, both will help kick off next week’s Macworld/iWorld conference in San Francisco. They will attend a session where they will talk about portraying two of the three Apple co-founders. Also in attendance will be musician Will.iam and Intel’s Brian David Johnson. The first Macworld Expo was held in 1985 in San Francisco. It was often used by Jobs as a forum to announce new Apple products. For example, the first iPhone was announced at Macworld 2007. In December 2008, Apple announced that they would no longer attend Macworld, and instead focus on their own events. The biopic, "jOBS," debuts in theaters in April. Source: Macworld

A Story About How Apple Goes About Purchasing Other Companies 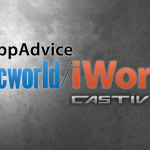 Giveaway: Here’s Your Chance To Join Us At Macworld/iWorld
Nothing found :(
Try something else