You are using an outdated browser. Please upgrade your browser to improve your experience.
by Juli Clover
January 24, 2013
Back in October, the Register of Copyrights at the Library of Congress, decided that unlocking cell phones would become illegal. There was a 90-day window before the new restrictions went into place, meaning people could still buy and unlock a phone during that time period. There’s some bad news, though. That 90-day window will expire this Saturday, on Jan. 26. The Register of Copyrights is responsible for checking exemptions to the Digital Millennium Copyright Act (DMCA) every three years (deciding what people can and can’t do under the act) and while unlocking cell phones was previously allowed, that is no longer true. 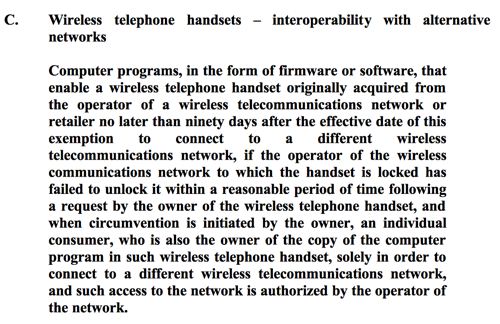 The ability to unlock a cell phone to move from one carrier to another has been authorized since 2006. The Register has decided that the firmware on the phone (the software locking you into a carrier) is copyrighted and may not be altered without violating the DMCA. Of course, carriers can still unlock phones. Verizon’s iPhone 5s, for example, come unlocked out of the box, and AT&T will unlock off-contract phones. You can always buy an unlocked cell phone as well, paying full price from the Apple Store. Though you can no longer unlock your cell phone on your own, you can still jailbreak it. Jailbreaking has been okayed since 2010, but don’t go jailbreaking your tablet - that’s against the law. If you want to unlock your phone, now is the time to do it. It’s only legal for two more days. Source: TechNewsDaily

Free Your iPhone?
Nothing found :(
Try something else