You are using an outdated browser. Please upgrade your browser to improve your experience.
by Bryan M. Wolfe
January 25, 2013
IDC is out with the company’s year-end smartphone report for 2012. It shows a marketplace heavily dominated by Apple and Samsung, according to AppleInsider, which first posted the news. During the past 12 months, Samsung saw the most growth. The Korean company lead all others with 215.8 million smartphone shipments, or an increase of 129.1 percent. Apple, by contrast saw shipments jump 46.9 percent to 136.8 million units worldwide. In total, the year ended with Samsung at 39.6 percent and Apple at 25.1 percent of total worldwide market share. Not surprisingly, the other smartphone companies all saw market losses during 2012. Nokia lost 54.6 percent, while HTC saw a slide of 25.2 percent. RIM was down 36.4 percent. For all of 2012, smartphone shipments worldwide increased 10.1 percent to 545.2 million units. Earlier this week, Apple announced reported record revenue of $54.5 billion along with a net quarterly profit of $13.1 billion, or $13.81 per diluted share. Apple missed estimates on revenue numbers, but did beat profit estimates. Source: AppleInsider

AT&T Activated A Record 8.6 Million iPhones During The Holiday Quarter 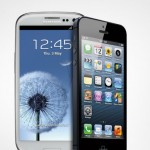 Samsung’s Next Smartphone Could Make Us Soon Forget The iPhone’s Retina Display
Nothing found :(
Try something else