You are using an outdated browser. Please upgrade your browser to improve your experience.
by Christine Chan
January 4, 2013

As we become more and more digital, we still face the biggest problem of electronics: battery life. While Apple has done much to improve (and impress us with) the battery of their iPhones, iPads, and iPods, the fact is that under heavy usage, we’re going to need more juice — and for some, the typical external battery or case may not provide enough charge for more than a couple of charges. What if you need more? Well, the Portable Energy Station 10000 from Satechi is the answer.

This slim brick weighs only 7.4 ounces and packs quite a punch — 10000mAh to be precise. Yep, you read that right — that’s 10000mAh. For comparison, Mophie’s external batteries only go up to 6000mAh, and their Juice Pack Plus case for iPhone 4/4S will only have 2000mAh. So with this portable battery from Satechi, you’re getting 5x the juice than one of the most popular battery case options.

Nice Brick — What Does It Do?

The Portable Energy Station 10000 is rather big for an external battery, but it is definitely still portable enough to slip into your daily computer bag, or a large purse. And for guys, well, it may even be able to fit in your pocket if you have the right pants on. It’s not much larger than one of those giant Android phones, to be honest.

The slim brick of a battery is sleek, with black plastic on the top and bottom, but has an aluminum silver band around the edges. The Satechi logo is branded on the front, and you’ll find the two USB ports on the right side of the battery. The power button is located on the bottom right, which is also where you will find the charging input port as well (mini USB).

As you charge the battery, or are charging your USB-powered devices, you will find luminous blue LED lights on the front black surface. There are five lights, which will indicate how much juice is in the battery.

Since the Portable Energy Station uses USB for energy output, you can use any of your own USB cables to charge your iPhone, iPad, or iPod. If you don’t have your cable, you’re in luck! Satechi includes a USB cable with six different connectors, including a 30-pin, micro-USB, and mini-USB.

Unfortunately, the product does not have a Lightning connector, so if you are using the iPhone 5, fourth-generation iPad, or iPad mini, you’re going to have to bring your own Lightning cable.

To carry the battery around, Satechi also provides a travel pouch that has a divider in the middle. This allows for easy separation of the battery and your cable, which is great.

This is quite a powerful battery, and it’s quite a bargain for the price! For only $60, you’re getting a whopping 10000mAh of juice! The battery can also charge two devices simultaneously, and unlike the AViiQ Portable Charging Station, it is powerful enough to charge Retina iPads.

The battery also looks and feels great. It is a combination of plastic and brushed aluminum, so it’s a stylish accessory to carry around with you. It’s also has a bit of weight, but it’s not too heavy where you would notice it in your daily bag. The LED lights are a great bonus, adding some flair and an easy way to see how much juice you’re carrying.

On top of that, using the thing couldn’t be any simpler. When you plug it in, if it needs more power, you’ll know because it will light up. If not, then it won’t do anything and you will know that it’s full. To charge devices, just plug them in to the dual USB ports, and then press and hold the power button down for a few seconds — the battery will light up and begin charging. To turn it off, repeat the process.

With 10000mAh of power, this external battery should last you a handful of complete charges on your iPhone and iPad before it needs to be refilled again. Satechi also gave it a pretty good energy output, as it will charge up your iPhone pretty quickly.

This is a great accessory to bring along on busy days, such as conventions, long commutes, boring flights, and even the coffee shop — you never know when you will need to recharge, and you won’t have access to an outlet all the time!

It’s also pretty amazing that this is not restricted to just iDevices — if you have anything that can be charged with a USB cable, then this battery can charge it back up for you! Including a USB cable with various adapters is quite a blessing.

Since the capacity of this is 10000mAh, the major downside is that once you deplete it of energy, it will take a long time for it to charge back up again. For me, it took most of the night to get it back to 100 percent again, so I would recommend charging it overnight. This definitely isn’t something that you can get back up in an hour or two, so be prepared.

While the travel pouch it comes with is nice, I found that sometimes the drawstring doesn’t keep it tightly closed at the top, so if you aren’t careful, the battery may slip out. Not a big deal, but it should be pointed out.

If you don’t have any other devices that use the included adapters, then it’s just more clutter for you. But hey, at least the option is there! Too bad that they couldn’t include a Lightning connector — that would have been a lifesaver for some.

The AC adaptor that is included is also a bit hard to travel with, since the prongs do not fold in. However, you probably won't need to travel with it very often (mostly just trips), so it's not a dealbreaker.

How Does It Stack Up To The Competition?

As I’ve already mentioned, this battery is quite a bargain. For only $59.99, you are getting much more juice than what the other companies are offering at the same price point.

Just Mobile offers the Gum Pro for $59.95, but it only has 1000mAh (though it’s much more portable). Mophie has the Juice Pack Powerstation Mini for $59.95 as well, though it’s recommended only for smartphones and USB devices, not tablets.

For your $60, you can’t get much better than the Satechi Portable Energy Station 10000.

If you’re looking for a beefy battery for all of your USB devices, including your new iPhone 5, iPad 4, or iPad mini, then you just can’t go wrong with this offering from Satechi. With 10000mAh, you’re guaranteed to get plenty of full charges with it before you have to recharge the battery again, and it’s portable enough to carry around with you everywhere. It also looks great, and doesn’t feel cheap.

Get Pinpoint Accuracy And Comfort With Adonit's Jot Pro Stylus 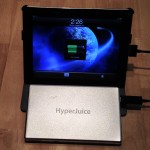 Supercharge Your iDevice With The HyperJuice 2 External Battery
Nothing found :(
Try something else