You are using an outdated browser. Please upgrade your browser to improve your experience.
by Bryan M. Wolfe
February 5, 2013
When Apple releases a new iPhone, millions more are either sold, given away, or sent to a trash bin. People Power will soon give iOS device owners another option on what to do with old iOS devices. People Power Presence is a new app currently in beta that turns old smartphones into wireless Web cameras. Best of all, the app and service are absolutely free. AppAdvice recently had the opportunity to discuss the app, and the technology behind it, with David Moss, the co-founder and chief technology officer at People Power. What we found was a promising new app that could put a new spin on the concept of Internet of Things. With People Power Presence, an old iPhone/iPod touch or iPad can be instantly turned into a Wi-Fi connected webcam without additional hardware. To accomplish this, all a user has to do is download and install the free People Power Presence app on two or more devices. As such, the old device serves as the actual cam, while the new one acts as an administration panel. People Power Presence provides a number of great tools that make it much more than an everyday video monitoring app. These include the ability to set rules, and get alerts when certain actions happen. For example, alerts could indicate when the kids arrive home from school, or when there is a knock at the front door. However, it gets better. People Power Presence could also be used to control sounds or lights in a house, or to set the temperature before one arrives home for the night. These features are accomplished by purchasing an external device either directly from People Power, or thanks to an API, a third-party vendor. According to Moss, People Power Presence could one day be used by school districts as an inexpensive way to monitor the comings and goings at different buildings. Additionally, he says that the service would work well as a monitoring system for the elderly. Neighborhood watch groups have also shown an interest in the service, according to Moss. He believes that what makes People Power Presence unique is that it gives users another choice on what to do with older iOS devices. Plus, because the basic service is absolutely free, the price of entry is minimal. He concludes, “Our goal is for people to find us because our service is free. And then like it so much that they’ll add to it.” Take a look: People Power Presence looks promising and we can't wait to see how the product grows. It arrives in March in the App Store. Until then, interested parties can request a beta invitation on the People Power website. 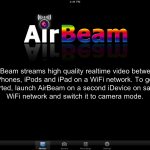 AirBeam Gives New Meaning To “Beam Me Up …”
Nothing found :(
Try something else