You are using an outdated browser. Please upgrade your browser to improve your experience.
by Bryan M. Wolfe
February 26, 2013
The music industry has reason to celebrate as it recorded its first sales increase since 1999. Last year, sales climbed 0.3 percent worldwide to $16.5 billion, according to industry trade group IFPI. This was the first time the industry has seen growth since folks were using Napster to download music. Under the heading, “Digital driving recorded music industry towards recovery,” IFPI says that digital revenues were up 9 percent year over year, with major music services now open in more than 100 markets. Digital revenues include music that is downloaded, subscribed to, and is advertising-supported.

The best-selling albums of the year were Adele’s “21,” with sales of 8.3 million units, followed by Taylor Swift’s “Red” with 5.2 million. “Babel” by Mumford & Sons, which earlier this month received the Grammy's Album of the Year award, recorded sales of 2.3 million units, which was No. 8 overall. In terms of singles, Carly Rae Jepsen’s “Call Me Maybe,” was the top seller, followed by Gotye’s “Somebody That I Used To Know,” and PSY’s “Gangnam Style.” Here are the charts: 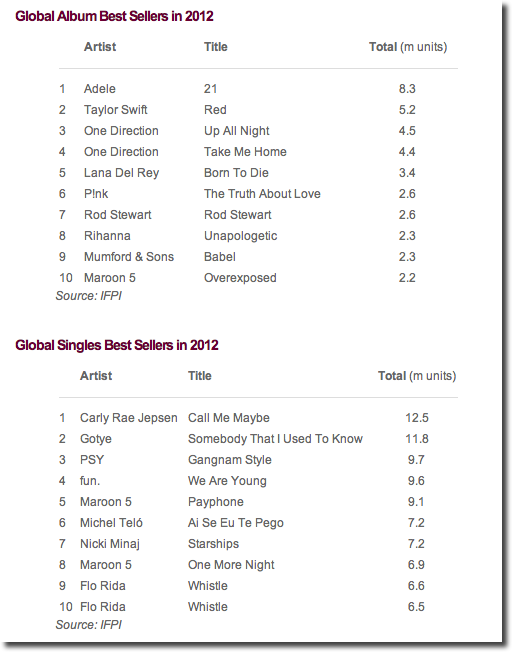 News that the recording industry actually saw sales growth for the first time in 15 years could be good news for Apple, which is rumored to be working on an iRadio service. It should also help Spotify, which wants to begin offering ad-supported free music on iOS devices soon. 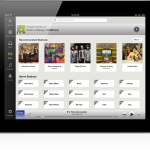