You are using an outdated browser. Please upgrade your browser to improve your experience.
by Bryan M. Wolfe
February 4, 2013
Samsung’s teaser for the company’s Super Bowl advertisement went after Apple in a subtle way. The actual ad that aired during last night's game, however, made no mention of their No. 1 competitor, subtle or otherwise. During the two minute ad comedians Paul Rudd, Seth Rogen, and Bob Odenkirk banter about many things, but not one of them was Apple. The result was a brilliant ad that should cause Apple some headaches going forward. Take a look: The teaser ad, which I discussed last week, never actually mentioned Apple, either. However, it took less than five seconds to figure out who the joke was on. For 60 seconds, the three jokesters go back and forth about how certain words cannot be used in the Super Bowl ad because of trademark concerns. Naturally, this was a direct jab at Apple who has sued the Korean company often in recent years claiming patent infringement. Take a look:

Personally, I thought both ads were extremely well done. In fact, I wish Apple would have spent some money and offered their own Super Bowl ad. You may recall that they once did this with some success. 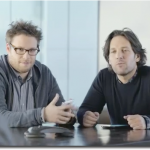 Admit It, Samsung's Super Bowl Ad Is Funny Even Though It Pokes Fun At Apple
Nothing found :(
Try something else