You are using an outdated browser. Please upgrade your browser to improve your experience.
by Bryan M. Wolfe
February 13, 2013
One of the key limitations with the Apple TV is that third-party developers cannot create apps for it. That could soon change. In a note to investors, Jefferies analyst Peter Misek suggests that Cupertino will hold an event in March to announce an Apple TV-related SDK, and perhaps more, according to news first reported by MacRumors. This event, which Apple has yet to announce, would almost certainly feature a next-generation Apple TV. However, Misek doesn’t believe that a long-rumored iTV will be making an appearance, at least for now. The analyst suggests that the launch of an Apple TV SDK would be the best indicator yet that an actual Apple television was on track to debut. Misek states:

Channel checks indicate Apple has a product event in March that is Apple-TV related (possibly an iTV SDK introduction). We think a Sep/Oct iTV launch is being targeted.

It should be noted that The Loop's Jim Dalrymple has refuted Misek's claim of an event scheduled for next month. Meanwhile, one of the major contributors to Xbox development, Nat Brown, has expressed concerns that an App Store on the Apple TV would “simply kill” current home gaming systems such as the one he created plus the Wii-U, and Playstation. He states:

Apple, if it chooses to do so, will simply kill Playstation, Wii-U and xBox by introducing an open 30%-cut app/game ecosystem for Apple-TV. I already make a lot of money on iOS – I will be the first to write apps for Apple-TV when I can, and I know I’ll make money.

The first Apple TV launched in January 2007. Since then, Apple's "hobby" product has been updated twice, the last being in March 2012. The third-generation Apple TV is available at retailers for $99. We will certainly keep on top of this Apple TV event rumor. Were Apple to announce it, we will almost certainly be there to provide coverage. Update: As Cult of Mac correctly notes, Misek's predictions about Apple recently have been more wrong than right. In other words, perhaps The Loop is right. 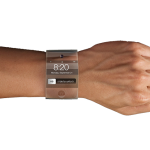 Forget The iPhone 5S, Bring On The iWatch And iTV

Report Says HBO Content Coming To Apple TV This Year
Nothing found :(
Try something else