You are using an outdated browser. Please upgrade your browser to improve your experience.
by Bryan M. Wolfe
March 26, 2013
In December, I offered a lengthy piece on how a six month product life cycle shouldn’t worry Apple users. This came as a result of Apple’s controversial decision in October to retire the “new” iPad, just seven months after it came to market. In just a few days, April begins. When it does, it will have been six months since that fateful iPad mini “special event” appeared to have truncated the Apple product launch cycle for 12 to six months. This means that another event is coming very soon, right? Probably not. In hindsight, I’ve come to the conclusion that the six month product life cycle is dead, even before it began. In fact, I’m now convinced that the early demise of the third-generation iPad was nothing more than an anomaly that probably won’t be repeated again. Instead, I now believe that Apple’s traditional one-year product release schedule remains alive and well. What happened, or rather what didn’t happen? I’d suggest that the “new” iPad was released in March 2012 because that was the norm. Up until that point, new iPads launched in the spring, while new iPhones arrived later in the year. Unfortunately, the iPad 3, as we would later find out, didn’t match other products in Apple’s pipeline. By October, the company had announced the iPhone 5 and first-generation iPad mini. Both of these products included the new Lightning connector. Hence, the reason the slightly different iPad with Retina display was announced seven months after its successor. Of course, I may be completely wrong -- again. Apple could, in fact, announce a “special event” in April and use it to unveil a second-generation iPad mini as was once rumored. But I don’t believe that this will be the case. Instead, the next iPhone will likely launch sometime this summer, followed by new iPads in the fall. Although the basis of my original report proved wrong, it did include some concluding narrative that I still believe is true. At the time, I stated:

Like I have done with my iPad purchases, I have decided that a new iPhone isn’t necessary each and ever year. Therefore, my next iPhone purchase with be the eight generation model, whenever that arrives. Upgrades are great, and for many, having the latest and greatest gadgets will always be important. For most customers, however, the modest jumps between versions no longer justify new purchases each year.

Okay, the floor is now yours. What do you think of my mea culpa? 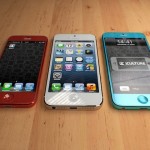 No Samsung Displays On Apple's Next Generation iOS Devices
Nothing found :(
Try something else