You are using an outdated browser. Please upgrade your browser to improve your experience.
by Bryan M. Wolfe
March 29, 2013
Shanghai Animation Film Studio is suing Apple. The studio, which is state-owned, claims that Cupertino infringed on intellectual property rights by offering unauthorized download services in the App Store, according to the South China Morning Post. The suit names Apple and their Chinese subsidiary, Apple Electronics Products Commerce (Beijing), as defendants. They state that more than 110 animation titles were illegally offered in the App Store. These include "Calabash Brothers," and "Black Cat Detective." According to one Shanghai Animation executive:

We want to keep tight-lipped on this case because, as we see it, it's just a litigation in which we want to get compensation [for our product]. It's a sensitive period now since Apple is a big multinational company and it is surrounded by controversies on its practices in China.

Apple has yet to comment on the pending litigation. Shanghai Animation Film Studio is best known for producing the classic animated film version of "The Monkey King."

Apple’s Patent Judgment Against Samsung Sliced By Almost Half 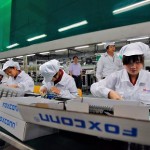 Apple Could Be Behind Foxconn's Manufacturing Slowdown, But For A Very Good Reason
Nothing found :(
Try something else