You are using an outdated browser. Please upgrade your browser to improve your experience.
by Bryan M. Wolfe
March 15, 2013
Glassdoor is out with their annual report on the Top 50 Chief Executive Officers. This year, Facebook’s Mark Zuckerberg took the top spot. Apple CEO Tim Cook, who ranked No. 1 in 2012, dropped to No. 18 in this year’s survey. In the past year, Zuckerberg’s approval ratings have climbed 14 percentage points to 99 percent. By contrast, Cook’s numbers fell four points to 93 percent. Of the 50 CEOs ranked in 2012, only 17 remain on this year’s survey. 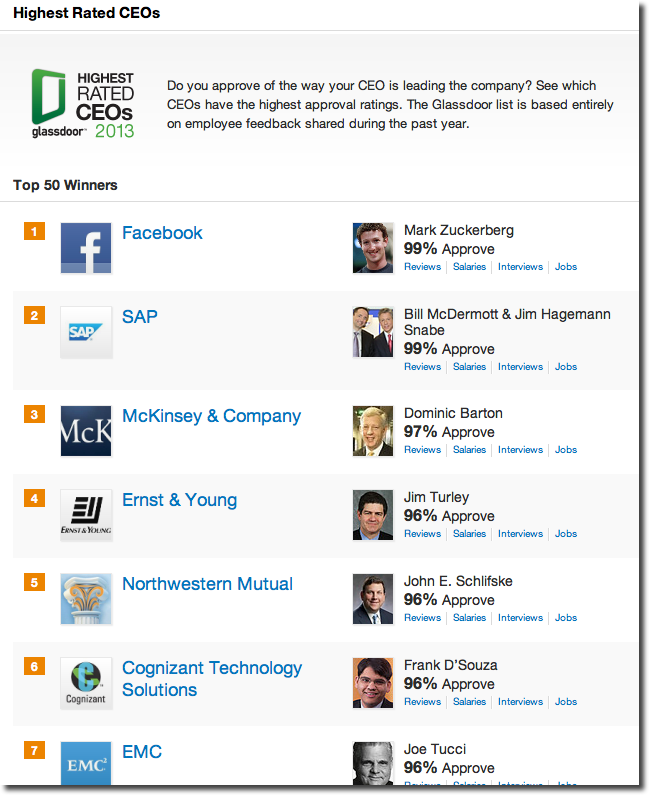 Among technology leaders, the list includes Google's Larry Page (No. 11), and Amazon's Jeff Bezos (No. 16), among others. The only female on the list is Victoria Secret's Sharen Turney at No. 42. For the entire list, click here. Note: The survey is based on employee reviews submitted to Glassdoor between Feb. 25, 2012, and Feb. 24, 2013.

Tim Cook May Testify In E-Book Price Fixing Lawsuit Against Apple
Nothing found :(
Try something else