You are using an outdated browser. Please upgrade your browser to improve your experience.
by Bryan M. Wolfe
April 19, 2013
Each time someone asks Siri a question, a recording of their voice and requests are stored on an Apple server. Until now, we weren’t sure how long Apple kept this information. Now we know. According to Wired, all those questions, messages, and stern commands are kept for up to two years. However, according to Apple’s Tracy Muller, “the company takes steps to ensure that the data is anonymized and only collects the Siri voice clips in order to improve Siri itself.” When you ask Siri a question, Apple generates a random number to represent the user. This number, however, isn’t associated with an Apple ID, phone number, or email address. Once the voice recording is six months old, Apple “disassociates” the user number from the clip. The disassociated clips are kept for up to 18 more months for “testing and product improvement purposes.” Says Muller:

Apple may keep anonymized Siri data for up to two years. If a user turns Siri off, both identifiers are deleted immediately along with any associated data.

To turn Siri off, go into the Settings app on your iPhone or iPad. Go General > Siri and toggle Siri to the off position. Privacy experts have long been concerned about what happens to Siri data. This concern has largely been based on Apple’s “fuzzy disclosures,” which aren’t included on Apple’s Siri FAQ page. Personally, I’m content with Apple’s statement on this matter. Apple has been very open in explaining that Siri requires an Internet connection to work. Therefore, users already knew that the voice clips went somewhere beyond their device. Knowing this additional information should go a long way at washing away fears some might have had. As a good rule of thumb, if you don’t want your voice and questions stored somewhere, don’t use Siri. First introduced on the iPhone 4S, Apple's voice assistant program is available on the iPhone 5, iPad with Retina display, and iPad mini. The retired third-generation iPad also has Siri preinstalled. 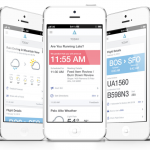 Osito Wants To Make Our Lives A Little Bit Easier 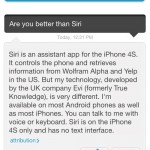 New Amazon Acquisition Hints At A Forthcoming Smartphone
Nothing found :(
Try something else