You are using an outdated browser. Please upgrade your browser to improve your experience.
by Bryan M. Wolfe
April 19, 2013
Volkswagen is set to unveil the iBeetle at the Shanghai Auto Show, which begins tomorrow, April 20. The new car is the first from the German company to integrate with Apple’s iPhone through the use of a dedicated app and docking station. The iBeetle, and iBeetle Convertible will both launch as 2014 models, and be available at the start of the year. According to Volkswagen, the docking station is located centrally on the dashboard of the iBeetle. From here, a driver can use the iPhone to navigate, make calls hands-free, listen to music, and more. The iBeetle app works via the docking station, or may be used wirelessly. Features include: The special edition iBeetle will also come with other customized features in addition to the standard iPhone interface. These include 18-inch “Disc” alloy wheels, door mirror housings, and more. On the inside, the iBeetle includes steering wheel accents and a dash pad executed in “Galvano Grey.” The iBeetle is also upgraded by a customized shift lever grip, black sport seats in "Vienna" leather, and contrasting seams in light "Ceramique." Autoblog calls the iBeetle little more than a “factory rehash of aftermarket items.” In particular, they wonder what happens to the special dock when Apple changes the shape and form of “its darling handheld at every generation.” On this point, I have the same concerns. However, until I actually see the iBeetle in person, I’ll reserve judgement. How about you? [gallery] 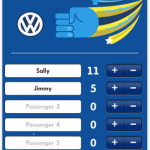 Punch Dub Meets iOS In Passat Road Rules
Nothing found :(
Try something else