You are using an outdated browser. Please upgrade your browser to improve your experience.
by Bryan M. Wolfe
May 28, 2013
The U.S. Patent and Trademark Office has published a new Apple patent that has to do with an iPhone’s volume controls. U.S. Patent No. 8,452,000 for "Adjustment of acoustic properties based on proximity detection,” was first submitted in 2008. The patent describes a system that uses an iPhone's various sensors to increase and decrease volume, as well as switch between the device's speakers, depending on how far away the handset is from a user. The patent also discusses the use of profiles to implement a proximity-based system. These profiles would vary depending on how close the user is to the iPhone’s receiver. As such, the further away they are, the more the chance that the device will automatically switch to the “speakerphone” profile. As noted by Apple in the patent:

In accordance with this invention, the acoustic properties of acoustic transducers in a device may be adjusted in the manner described above based on the proximity of the device to a user, or to any other surface that might affect the acoustic impedance at the transducer output. For example, a mobile telephone speaker may perform differently when laid on a table than if held in a user's hand.

This isn’t the first time that proximity sensor controls have been used and/or patented on iOS devices. Sensors are already used, for example, to turn an iPhone’s screen black during a call. U.S. Patent No. 8,452,000 credits Justin Gregg, Michael Lee, and Chad Seguin as its creators. 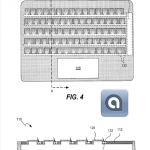 Forget The iPhone 5S, Look At This iPhone 6 Concept Design Video
Nothing found :(
Try something else