You are using an outdated browser. Please upgrade your browser to improve your experience.
by Bryan M. Wolfe
May 8, 2013
One of coolest photo-filtering apps for iPhone is about to have a little brother. The Hipstamatic maker is expected to launch Oggl later this week, according to AllThingsD. Oggl’s release is significant mainly for its backstory. The app sounds a lot like Hipstamatic. In fact,the  tools from the older app, including lenses and films, are also available here.

So why release Oggl? Hipstamatic is trying to keep existing customers happy, while also reaching out to new ones. To do this, the Hipstamatic app of tomorrow will look a lot like the one that is already available. Oggl, meanwhile, will be the vehicle that Hipstamatic uses to move forward as a company. Despite this push, CEO Lucas Buick, says that “Hipstamatic Classic is still awesome.” According to AllThingsD:

So Hipstamatic’s approach with Oggl is to relinquish its core brand and audience, built with years of work, in order to reshape what it already built into something new.

So what is different between the two apps? Oggl will focus more on creating a community where users can share their best work. With Hipstamatic “we’ve never really cared where you post your photos,” said Buick. With Oggl, that will be different. Additionally, users will be able to add filters to photos after they are taken. This has never been possible in Hipstamatic.

Oggl also represents a business model change for the company. While Hipstamatic offered new lenses and film via occasional in-app purchases, Oggl will make them all available as part of a subscription. Oggl users who want unlimited access to past, current, and future options will have to pay $9.99 a year, or $0.99 a month. Don't wish to subscribe? The free app will come with five pre-loaded "favorites" for situational shooting. These include: nightlight, food, portraits, landscapes, and sunsets. Personally, I can't wait to download Oggl. However, as a long-time Hipstamatic user, it will take more than a new photo community to convince me to pay $9.99 per year. After all, I already own the lenses and films in the current app. Nonetheless, I'll reserve judgement for the time being. Oggl should launch later this week in the App Store. When it does, we'll let you know. In the meantime, the $1.99 Hipstamatic "Classic" download is available here. Note: This post has been updated to reflect the five pre-loaded "favorites" that come with Oggl. 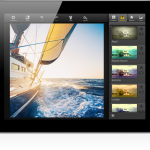 FX Photo Studio HD 5.0 For iPad Is Finally Here
Nothing found :(
Try something else