You are using an outdated browser. Please upgrade your browser to improve your experience.
by Bryan M. Wolfe
May 14, 2013
Designer Martin Hajek has published a new set of "iPhone mini" mockups. What makes these unique is that he uses one of the iOS 7 concepts floating around the blogosphere as his design's backdrop. These design mockups, which were first published by Hajek in March, now include an iOS 7 concept from Damaso Benitez. As Hajek notes:

After seeing some cool new iOS 7 concepts on Gizmodo I just had to see what they would look like in my budget iPhone concept.

Hajek’s designs were first commissioned by Dutch site iPhoneclub, and assume that Apple will release an iPhone mini with less expensive materials. In addition, his concepts are for both a 4-inch, and 4.5-inch design. Take a look at the designs here: [gallery]   Personally, I love Hajek's hardware design. However, I'm not too crazy about Benitez's iOS 7 mockup. This isn't to say that he did a bad job, but rather I hope that Apple doesn't change iOS that much. Rumors suggest that Cupertino's design guru, Jony Ive, is pushing for a flat iOS 7 design. Apple is expected to unveil the so-called "iPhone 5S" and a budget iPhone later this year. While previous rumors had suggested that both models would arrive in June, it now looks like that won't happen until August or September. See also: Apple's Next Handset Could Be Called The 'iPhone 6' After All ..., and A Large Reward Awaits iPhone 5 Owners. 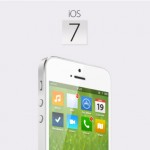