You are using an outdated browser. Please upgrade your browser to improve your experience.
by Bryan M. Wolfe
June 12, 2013
Four people are suing Apple and its CEO, Tim Cook. It is part of a class action lawsuit over alleged privacy violations resulting from Apple’s apparent participation in the National Security Agency’s (NSA) PRISM program. Larry Klayman, Michael Ferrari, Charles Strange, and Matt Garrison aren’t singling out Apple. They are also suing President Barack Obama, Attorney General Eric Holder, NSA Director Keith Alexander, the NSA itself, and the U.S. Department of Justice. Other defendants include Facebook, Google, YouTube, Microsoft, Skype, AOL, Yahoo, PalTalk, AT&T, and Sprint, and their CEOs. In a statement, Klayman states:

This and the Verizon class action will serve to unify all political and social persuasions in our great nation to wage a second American revolution, one that is peaceful and legal – but pursued with great resolve and force. Government dishonesty and tyranny against the people have reached historic proportions during the last three administrations in particular, and the time has come for We the People to rise up and reclaim control of our nation. If not, the government will control us and this will mark the end of individual liberties. The American people can thus use these class actions to 'man the barricades of freedom' against the establishment government despots and their corporate enablers who seek to enslave them through coercive abuses of their privacy. This Orwellian power grab can only be intended to blackmail the masses into submission in order that these modern day greedy tyrants achieve their corrupt ends.

This lawsuit isn’t the first, nor will it likely be the last, over U.S. government spying. The American Civil Liberties Union (ACLU) has also filed suit, and Sen. Rand Paul (R-KY) is expected to very soon. While the newest lawsuit specifically targets the government’s PRISM program, the ones from the others are more specific. The ACLU and Paul are targeting Verizon, which is allegedly providing telephone records of millions of its subscribers to the NSA. 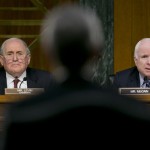 John McCain Got What He Wanted In iOS 7, And Thanks Apple For It
Nothing found :(
Try something else