You are using an outdated browser. Please upgrade your browser to improve your experience.
by Lory Gil
June 25, 2013
Welcome back to another installment of Musician’s Corner. Each week, we bring you news and information about apps and accessories we think are ideal for musicians and fans of music. Last week, we told you about the simple, yet effective, Song Keeper app. If you want a quick way to record new song ideas that you can easily share with band mates, Song Keeper is a great app to have. This week, we go hands-on with Blue Microphone’s latest release. The Nessie is a full powered microphone that takes away the guesswork, making audio recording a breeze.

Nessie is a digital USB compatible microphone that was specifically designed to take the guesswork out of home recording. The studio processor inside the base of the device, built-in pop filter, and internal shock mount help take out pops and hisses that lead to ugly sounds when recording. Plus, the three different audio channels make it easy to switch from voice to instrument without having to make minor adjustments. 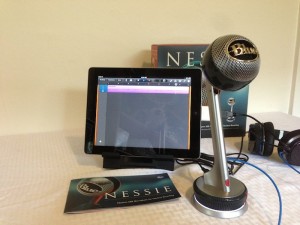 Nessie comes as one full piece with a micro-to-USB connector cable. You’ll also have a quick setup guide to walk you through the process. Because it is so easy to use, Nessie doesn’t come with anything but the solid-based microphone and the cable to connect it to your device. 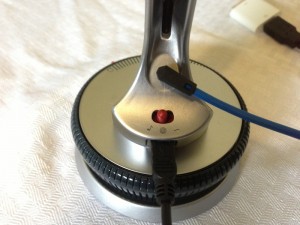 To connect Nessie to your Mac or PC, you’ll want to follow the set of instructions that come with the microphone. On a PC, you’ll need to change the recording options in your computer’s settings section. On a Mac, you’ll need to change the output options from your system preference section. I reviewed Nessie on my iPad, so I’ll go over the instructions for setting it up on a mobile device. I was unable to verify whether it was compatible with the first and second generation iPad, but I was able to use it on my third-generation model. Because there is still no Camera Connection Kit for the fourth-generation iPad, I can’t confirm that the Nessie will be able to handle connecting to a USB adapter and Lightning to 30-pin adapter. Hopefully, Apple will launch a Camera Connection Kit for the Lightning connector soon. Since Nessie is USB compatible, you’ll need the Camera Connection Kit from Apple (or a compatible third-party version). Insert the micro side of the connection cable into the Nessie and the USB side into the Camera Connection Kit’s USB adapter. Then, plug the adapter into the iPad. Then, open your recording app, like GarageBand. Do it in this order or the app may not read the technology that is plugged in. 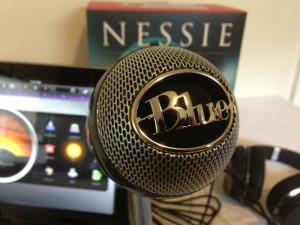 Nessie is a solid 1.4-pound condenser microphone that reaches nearly one foot tall when extended to its maximum height. The base is slightly less than 4 inches in circumference and the ball of the microphone is approximately the same. The base itself is where most of the weight is held. It is made out of a sturdy metal and plastic casing that holds the studio processor, which automatically adjusts for hissing sounds and up-front instruments or bass-heavy vocal recordings. The base also features a headphone mixer that increases or decreases the volume by twisting the exterior ring from left to right. The microphone’s pole, which is molded to the base, is made of a sturdy plastic and features the mute button at the front, the three-channel audio selection on back, and the micro connection port. The microphone itself is about the size of a softball and is made from the same type of plastic as the pole. It features a pop filter, hidden just behind the plastic mesh and “Blue” logo. It is attached to the pole with a red metal movable arm that lets you swing it outward and adjust the microphone’s direction upward or downward. Thanks to the movable arm, you can point the microphone’s head straight up into the air to capture ambient sound, or direct it down at your guitar for optimum instrument sound. 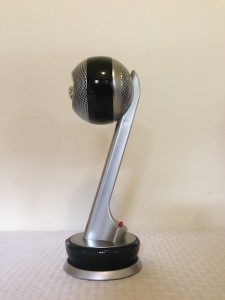 When plugged into my third-generation iPad, I was able to start recording almost immediately without having to make any tweaks or adjustments. Nessie features three channels, Raw, Voice, and Music. Each one changes what the processor does to the sound before sending it to the recording device. Raw is a pure, unaltered version of the audio you are recording. It essentially shuts off the internal processor so that you can manually adjust the sound yourself. This channel is ideal for experienced audio recorders. The Voice channel is preset for typical interview audio recording and works extra hard to filter out the harsh, high end hissing that happens when people speak closely into microphones. Of course, the built-in pop filter keeps the “Ps” from popping. The Music channel is designed with preset processor adjustments to bring out the brightness and clarity of your instrument, especially acoustic guitars, pianos, and wind instruments. Unlike the Spark Digital these channels don’t turn down the volume of the microphone’s inputs, they actually alter the sound. The volume is the same no matter which channel you use, but the brightness, bass, and richness of sound adjust slightly depending on your option. 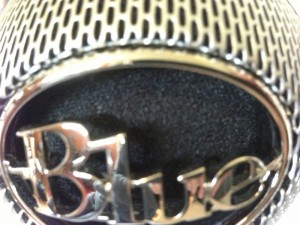 Nessie is really easy to use out of the box. In less than 20 minutes, I had recorded an entire song on GarageBand with one vocal track, two acoustic guitar tracks, and the in-app drum kit. Thanks to the internal audio processor, I didn’t have to make any prerecording adjustments to the sound. I added some reverb and delay effects after I was done, but the sound was great without the effects. 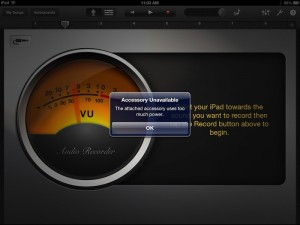 I don’t think Nessie was designed for the iPad. Even though I was able to get it to work, I received two pop-up messages telling me that the recording device was drawing too much power for use. I had to exit the app, unplug the Nessie, plug it back in, and reopen the app to get it to accept the microphone. That happened twice upon setup. However, the microphone worked find after completing the work around. I did not try Nessie out on my Mac. The mute button at the front of the pole is extremely sensitive and in a poorly placed position. It is very easy to accidentally hit the mute button and because of its design, you wouldn’t even know you had muted your microphone except that a light at the base blinks on and off. 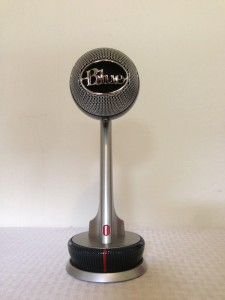 Nessie is the perfect microphone for beginners. If you are just starting out in the recording business and want a simple set up, this microphone will let you feel like a pro without making you do the work of one. It’s like using the automatic setting on your DSLR camera. It does the hard work of adjusting and fine-tuning, while giving you the quality you want for a professional job. Buy now: Get it from Apple’s online store for $99.99. 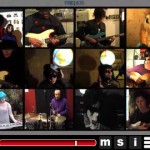 Could The Nyco Project's New EP Be The Most Innovative Music App Yet?