You are using an outdated browser. Please upgrade your browser to improve your experience.
by Bryan M. Wolfe
June 24, 2013
The next iPhone is likely to look very similar to the current model. This doesn’t mean that the so-called “iPhone 5S” won’t include a number of new features. One of those is likely to be a dual-LED flash, according to 9to5Mac. According to the report, the two LEDs would throw off different colors of light. In this case, white and yellow light. As a result:

With that in mind, based on light sensors that Apple has included in its product before, we speculate that Apple may be able to light up either one or both lights depending on determined lighting conditions or use a determined amount of light from each flash. For example, for photos taken at a concert (where the scene is typically dark with many lights flashing), Apple’s new iPhone could light up appropriately for the user to take the best possible shot.

Here’s a video of a dual-LED flash being used as a flashlight on a smartphone that isn’t an iPhone: This isn't the first time that we've heard that Apple was working on bringing a dual-LED flash to the next iPhone. A report in February said the same, as did one published just days ago. Apple is expected to unveil the seventh-generation iPhone in the coming months. As usual, we'll keep you updated. Photo: Rear camera, microphone, and dual-LED flash on prototype iPhone 5S, MacRumors 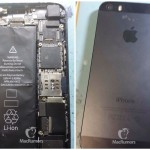