You are using an outdated browser. Please upgrade your browser to improve your experience.
by Bryan M. Wolfe
June 13, 2013
One of the most important features in iOS 7 is also one that has been least reported on. Apple appears to have completely rewritten the Core Bluetooth playbook with this release. As a result, we could soon be seeing “features for everything from time to notifications, keyboards, and stereo sound,” according to 9to5Mac. These changes take the form of two new services available to developers: the Apple Notification Center Service (ANCS), and the Preservation and Restoration Service (PRS). The first will change how Bluetooth-enabled devices are able to talk to the iPhone/iPod touch and iPad. According to the report:

With ANCS in iOS 7, Apple is opening up full access to Notification Center, allowing Bluetooth devices to automatically receive any notification event from your iOS device by default. iOS 7 will also automatically reconnect to the device without need for a third-party app.

By contrast, PRS will make sure that Bluetooth devices remain connected to iOS even when they aren’t being used. Under iOS 6, this isn’t always possible, since devices are sometimes disconnected to free up memory for other apps. This change will allow devices such as smart watches and health monitors to be connected to iOS at all times. Both points sound very exciting, don’t you think? For more iOS 7 news, see: Apple's iOS 7 Compatibility: Supported Devices And Features, and How You Too Can Set A Stunning Panoramic Wallpaper In iOS 7. 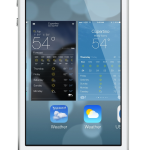 Apple's iOS 7 Compatibility: Supported Devices And Features
Nothing found :(
Try something else