You are using an outdated browser. Please upgrade your browser to improve your experience.
by Bryan M. Wolfe
June 6, 2013
The so-called “iPhone mini” is likely to launch ahead of the “iPhone 5S.” When it does, it could arrive in five different colors. Topeka Capital analyst Brian White also notes that the “iPhone 6” will arrive in 2014 and have a screen size larger than 4-inches, according to CNET. White’s comments essentially repeat what others have been saying in recent months – except on one key point. His suggestion that the budget iPhone will launch ahead of the iPhone 5S is unique. It also comes just days before the start of Apple’s Worldwide Developers Conference (WWDC), which begins on Monday, June 10. Coincidence? Maybe not. Prior to this report, the general theory has been that Apple wouldn’t release new iOS devices at WWDC, and instead focus on announcing Mac updates. White's comments don't specifically tie an early iPhone mini launch to WWDC. However, it now seems possible that the big surprise during next week's keynote could be the introduction of the long-rumored budget iPhone.

Of course, White is the same guy who suggested earlier this week (for a second time, I might add) that Apple will release a television set later this year that uses an “iRing” as a remote control. Therefore, maybe I'm taking a leap here that I shouldn't. Personally, I think that Apple would be wise to announce the iPhone mini at a separate event. That way, Apple would be able to create some momentum about the iPhone line twice in the same year. We’ll know soon enough. The WWDC keynote begins on Monday, at 10 a.m. PDT. As in past years, we'll be there live to give you full coverage. Stay tuned. 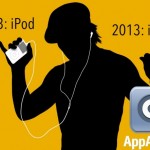 Apple's WWDC 2013 Banners Begin To Pop Up At Moscone West
Nothing found :(
Try something else