You are using an outdated browser. Please upgrade your browser to improve your experience.
by Bryan M. Wolfe
June 12, 2013
Attendees of this year's Worldwide Developers Conference (WWDC) have been invited to a Thursday night performance by Vampire Weekend. This is the second time the New York-based group has performed at WWDC, according to 9to5Mac. In a note to attendees, Apple says:

Here’s one great reason to give your Mac the night off. Vampire Weekend will perform at Thursday night’s WWDC Bash. The party starts at 6:00 p.m. at Yerba Buena Gardens. 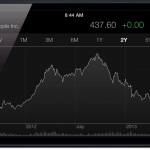