You are using an outdated browser. Please upgrade your browser to improve your experience.
by Bryan M. Wolfe
August 16, 2013
Apple has released the following notes for iOS 7 beta 6:

iOS SDK 7.0 provides support for developing iOS apps, and it includes the complete set of Xcode tools, compilers, and frameworks for creating apps for iOS and OS X. These tools include the Xcode IDE and the Instruments analysis tool, among many others. With this software you can develop apps for iPhone, iPad, or iPod touch running iOS 7. You can also test your apps using the included iOS Simulator, which supports iOS 7. iOS SDK 7.0 requires a Mac computer running OS X v10.8.4 (Mountain Lion) or later. This version of iOS is intended for installation only on devices registered with the Apple Developer Program. Attempting to install this version of iOS in an unauthorized manner could put your device in an unusable state. For more information and additional support resources, visit http://developer.apple.com/programs/ios/.

To report any bugs not mentioned in the Notes and Known Issues section, use the Apple Bug Reporter on the Apple Developer website (http://developer.apple.com/bugreporter/). Additionally, you may discuss these issues and iOS SDK 7.0 in the Apple Developer Forums: http://devforums.apple.com. To get more information about iCloud for Developers, go to http://developer.apple.com/icloud. Important Information about Music and Video Libraries This update addresses an issue with iTunes in the Cloud, where some purchases may download or play unexpected items. If you have any devices running previous versions of iOS 7 beta, you should:

The following issues relate to using iOS SDK 7.0 to develop code. Address Book Notes AirDrop Notes You are logged in to iCloud. The sender and receiver have each other’s Apple ID email addresses in Contacts on their devices. AV Foundation Notes AVCaptureSession now uses your app’s AVAudioSession by default. Core Animation Notes When the UIViewGroupOpacity key is not present, the default value is now YES. The default was previously NO. This means that subviews of a transparent view will first be composited onto that transparent view, then the precomposited subtree will be drawn as a whole onto the background. A NO setting results in less expensive, but also less accurate, compositing: each view in the transparent subtree is composited onto what’s underneath it, according to the parent’s opacity, in the normal painter’s algorithm order. Exchange Notes In Seed 4 and later, the Exchange DeviceIdentifier has been changed back to the behavior of iOS 6 where it uses the serial number. Fonts Notes New font line heights were introduced in Seed 4. If you had manually aligned your font in earlier seeds, it may move slightly up vertically in later seeds. Foundation Notes NSPredicate *p = [NSComparisonPredicate predicateWithLeftExpression:[NSExpression expressionForKeyPath:@"kMDItemContentTypeTree"] rightExpression:[NSExpression expressionForConstantValue:@"public.rtf"] modifier: NSAnyPredicateModifier type:NSLikePredicateOperatorType options:0]; iCloud Notes Sign out of iCloud. Turn off Activation Lock in Settings > iCloud > Find My iPhone. Known Issues Password fields are not displayed in alert views for apps in landscape (for example, Game Center authentication or In-App Purchase). Text entry still works, though you can’t see what you are typing. MapKit Notes If the calls to renderInContext on the layer backing an MKMapView are made off the main thread, they should be eliminated or moved to the main thread. Failure to do so can cause an app crash. Instead of using renderInContext, use the new MKMapSnapshotter APIs. Media Notes iOS now remembers the last used media app across reboot and app crashes. Media apps that can receive remote control events should be prepared to be launched in the background and potentially receive a remote control event to begin playback. Additionally, it’s important that media apps monitor and handle the media server reset event, since the media app may receive a remote request to resume playback after a reset. Notifications to monitor these media server events are available in AVAudioSession and proper handling is described in General recommendations for handling kAudioSessionProperty_ServerDied. Multipeer Connectivity Notes The MCSession APIs function as they were presented at WWDC. Major changes and enhancements include: - (NSOutputStream *)startStreamWithName:(NSString *)streamName toPeer:(MCPeerID *)peerID error:(NSError **)error - (void)session:(MCSession *)session didReceiveStream:(NSInputStream *)stream withName:(NSString *)streamName fromPeer:(MCPeerID *)peerID - (NSProgress *)sendResourceAtURL:(NSURL *)resourceURL withName:(NSString *)resourceName toPeer:(MCPeerID *)peerID withCompletionHandler:(void(^)(NSError *error))completionHandler - (void)session:(MCSession *)session didStartReceivingResourceWithName:(NSString *)resourceName fromPeer:(MCPeerID *)peerID withProgress:(NSProgress *)progress - (void)session:(MCSession *)session didFinishReceivingResourceWithName:(NSString *)resourceName fromPeer:(MCPeerID *)peerID atURL:(NSURL *)localURL withError:(NSError *)error For more information on these APIs, watch the video for WWDC 2013 Session 708, “Nearby Networking with Multipeer Connectivity.” Multitasking Notes Networking Notes Objective-C Runtime Notes Due to changes in how the isa field is implemented, *self may change during enumeration (for example, if the container is retained). Workaround: When implementing countByEnumeratingWithState, do not set state->mutationsPtr = self. Passbook Notes Photos Notes Upon upgrading from an earlier seed, photo thumbnails in the Photos app will not appear for a short while. Security Notes Siri Notes This seed includes development versions of new male and female Siri voices for U.S. English, French, and German. Social Notes Springboard Notes Sprite Kit Notes +[AVPlayer playerWithPlayerItem:] returns an AVPlayer object, but the current item will return nil if the player was created on another thread. Stores Known Issues App downloads can get stuck in the “Waiting” state. Workaround: Reboot your device once or twice to resolve the issue and allow subsequent downloads to continue. UIKit Notes Known Issues Password fields are not displayed in alert views for apps in landscape (for example, Game Center authentication or In-App Purchase). Text entry still works, though you can’t see what you are typing. Weather Notes Weather conditions are not animated on iPhone 4. WebKit Notes Wi-Fi Notes Seed 4 and later include changes to AWDL such that technologies that use it—such as AirDrop and the MultiPeerConnectivity APIs—will not work properly with older seeds. 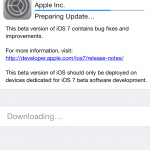