You are using an outdated browser. Please upgrade your browser to improve your experience.
by Bryan M. Wolfe
September 24, 2013
Research firm IHS is readying its annual iPhone report, which looks at what Apple’s handset costs to produce. The report doesn’t go live until tomorrow, Sept. 25. However, AllThingD got a first look and here is what they found out. The iPhone 5s Apple spends between $191 and $210 on each iPhone 5s that is produced. Add the $8 per unit cost of assembly, and the costs rise to between $199 and $218. The iPhone’s costliest component remains the display, at $41 per unit. The new fingerprint sensor on the iPhone 5s costs just $7 to produce per handset. Without a contract, the iPhone 5s sells at prices ranging from $649 to $849, depending on storage capacity. The iPhone 5c Cupertino’s mid-priced iPhone costs the company $173 to $183 per unit. This includes $7 for assembly. The iPhone 5c is priced to sell between $549 and $649 without a contract. IHS analyst Andrew Rassweiler tells AllThingsD:

I would say that they’re almost the same phone, except that the 5S has the fingerprint sensor, the A7 processor and some newer memory chips that consume less power. Beyond that, they’re basically the same.

These costs certainly don’t come as a surprise. In 2012, IHS noted that the iPhone 5 cost an average of $205 per unit to produce. Once again, I’m scratching my head at how little Apple pays for flash memory, compared to what it charges customers. The 16GB iPhone 5s, for example, costs Apple $199 per unit plus $8 for assembly. The 64GB iPhone 5s, by comparison, costs Apple just $19 more to produce. Consumers pay $200 more per unit for this component. Crazy, no? See also: Here's A Close-Up Look At Design Differences Between The iPhone 5s And iPhone 5, and The A7 Processor Powering The iPhone 5s Is Made By Samsung. 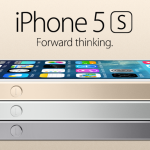 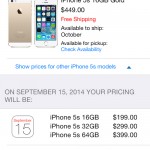 Use The Apple Store App To See If iPhones Are Available At Your Local Store
Nothing found :(
Try something else