You are using an outdated browser. Please upgrade your browser to improve your experience.
by Dom Esposito
September 5, 2013
Lately, there have been a lot of rumors surrounding a possible fingerprint scanner in the upcoming iPhone 5S. Any other day I’d ignore this repetitive rumor, but today, MacTrast has received an unofficial confirmation regarding the iPhone 5S and its home button's functionality. High resolution images of the leaked home button assembly were first published via Sonny Dickson on Sept. 4, 2013, but MacTrast did some additional digging and has learned a little more about this rumored part. According to iFixit’s CEO Kyle Wiens (via MacTrast), the leaked part shown above, could actually be the biometric fingerprint scanner we’ve been hearing so much about:

It looks like the home button will still have a physical clicking action to it still like the 4, 4S and 5. The additional square section next the the button is something new and probably suggests a fingerprint sensor given all the rumor wire chatter on how Apple is expected to add that feature. It looks like that part of the cable flips over the button and sits between the clicking action and the plastic button cover. So I’d say yes, these photos, if legitimate, corroborate the fingerprint rumors.

In my opinion, iFixit is one of the most reliable sites in the industry when it comes to parts. There’s no way for Wiens to give a solid confirmation based on photos alone, but I’m sure with iFixit’s teardown history, he probably knows a thing or two about this kind of stuff. That being said, we won’t have to wait too much longer to find out the truth. Apple’s big iPhone event is scheduled to happen on Sept. 10, 2013 in Cupertino, Calif. For more updates on Apple’s upcoming devices, be sure to follow AppAdvice on Twitter. 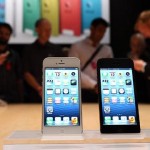 Your 2013 iPhone Trade In Guide 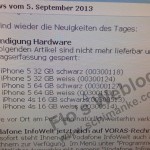 More Evidence Apple's 16GB iPhone 5 Will Live On Surfaces Online
Nothing found :(
Try something else