You are using an outdated browser. Please upgrade your browser to improve your experience.
by Bryan M. Wolfe
October 30, 2013
Apple’s research and development (R&D) expenses have climbed to another new high in the last year. In fiscal 2013, Cupertino spent a record $4.5 billion on R&D. This was an increase of 32 percent from the previous year, according to AppleInsider. In a recent 10-K filing with the U.S. Securities and Exchange Commission, Apple notes that R&D spending has climbed significantly over the past few years. In 2011, spending was $2.5 billion. A year later, it climbed 39 percent to $3.4 billion.

AppleInsider notes that despite the increase, Apple’s R&D spending has remained fairly consistent with respect to the company’s net sales. “Numbers that have also grown significantly.” On Monday, Apple announced a fourth quarter profit of $7.5 billion. From July through September, the company sold 33.8 million iPhones, a record for the quarter. Last year, Apple sold 26.9 million handsets during the same time period. The company sold 14.1 million iPads, up slightly from the 14 million sold in the same quarter last year.

Apple Records A $7.5 Billion Profit In The Fourth Quarter Of 2013 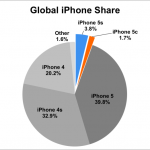 The iPhone 5s Continues To Dominate The iPhone 5c, But Its Lead Is Shrinking
Nothing found :(
Try something else