You are using an outdated browser. Please upgrade your browser to improve your experience.
by Bryan M. Wolfe
December 11, 2013
Glassdoor is out with its annual “Employees’ Choice Awards,” which honors the 50 best places to work. Once again, Apple made the list, although its ranking has fallen for the second year in a row. The Cupertino, Calif.-based company is No. 35 on the 2014 list, which looks at companies with 1,000 or more employees. In the 2013 survey, Apple ranked No. 34. Apple received a score of 3.8 out of 5. It is the result of an average taken from 2,557 ratings. As for the company's leadership, CEO Tim Cook received an approval rating of 92 percent on 1,152 ratings. 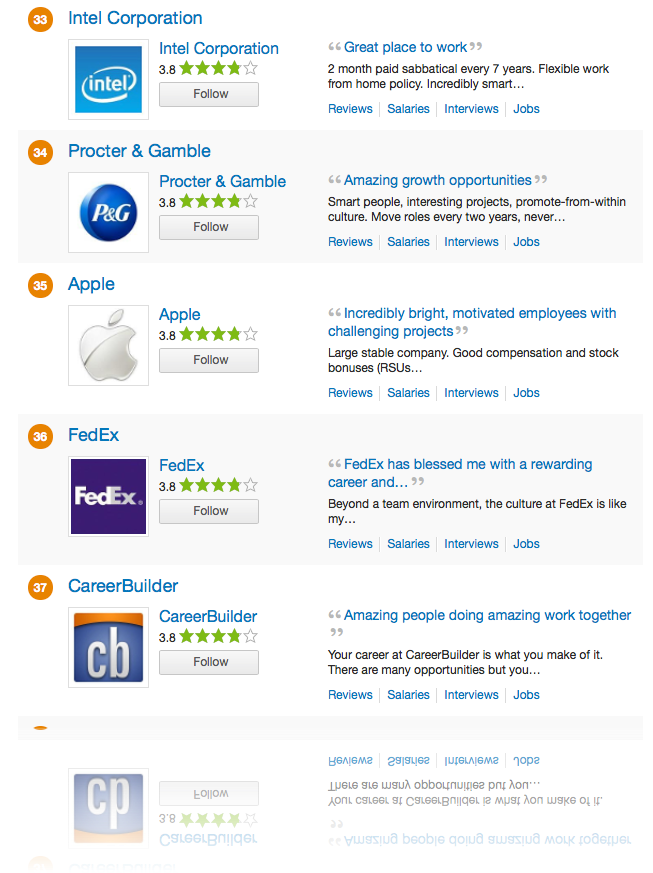 Under Glassdoor's "Review Highlights" section, the following pros and cons about working at Apple are cited:

For the second time in three years, Boston’s Bain & Company is ranked No. 1. They are followed by Twitter, LinkedIn, Eastman Chemical, and last year’s winner, Facebook. Other technology companies ranking ahead of Apple include No. 8 Google, No. 13 Qualcomm, and No. 33 Intel Corporation. For the 2014 Employees' Choice Awards, companies with at least 1,000 employees must receive at least 50 valid and approved company reviews throughout the past year. Apple’s best rating in the survey was in 2012 when it was ranked No. 10. From 2009 through 2011, it ranked No. 19, No. 22, and No. 20, respectively.

Where In The World Is Former Apple iOS Software Chief Scott Forstall?
Nothing found :(
Try something else