You are using an outdated browser. Please upgrade your browser to improve your experience.
by Dom Esposito
December 25, 2013
Jailbreak hacker Pod2g has announced the arrival of Evasi0n7 1.0.1. The latest update to the official iOS 7 jailbreak tool has been updated to remove the TaiG app store that's installed when a user's language is set to Chinese. After receiving complaints about the inclusion of TaiG, it looks like the community has been heard. After Evasi0n7 was released, details were revealed that made this jailbreak seem a bit sketchy. Luckily, just as they always do, the profound hackers involved, are setting the record straight and trying to make things right again. Here's the tweet from Pod2g announcing the update:

We have heard the community. Evasi0n 1.0.1 is available on http://t.co/lWu8tbs1oP. TaiG has been removed from the package. Merry Christmas!

Unfortunately, Evasi0n7 1.0.1 doesn't fix Mobile Substrate or iPad 2 compatibility issues, but given that the holidays are here, I'm sure these hard working hackers want to spend some time with their families. Pod2g assures that the iPad 2 issues will be resolved after Christmas.

We still have to work on the compatibility issue with the iPad 2, but we have been busy celebrating with our family... Tomorrow probably!

Overall, it looks like things are going to work out for the iOS 7 jailbreak. I'm just happy it's here. Of course, a stress free launch would be ideal, but I'm definitely thankful for the Evad3rs and all that they do. If you'd like to jailbreak your iOS 7 device, you can find out helpful tutorial here, and a list of compatible tweaks here. Evasi0n7 can be downloaded from the Evasi0n website. 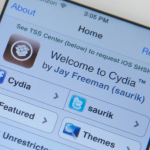 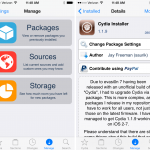 Jailbreak News: Cydia Has Been Updated With A New Design For iOS 7
Nothing found :(
Try something else